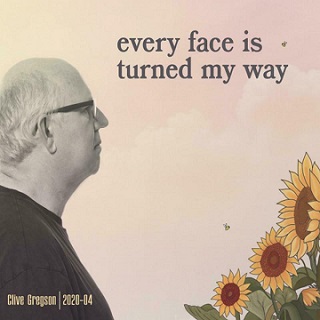 
The fourth album in his one a month release schedule (although the current situation may necessitate some tweaks on those not yet recorded), this is a sort of pilgrim's progress with the songs providing a loose narrative of his life as a professional musician.

'Friends Along The Way' kicks it off in vintage Gregson folk-rock-pop manner with jangling guitar and tumbling chords dedicated to friends made and lost on his musical journey singings songs of love and heartache in "Every bar-room, every dancehall, every nightclub, every stage" where, providing the album title "I look out and every face is turned my way".

The quality needle continues to bounce into the red throughout, next up being the equally perky 'Quite Well Known' with what I assume are dobro flourishes a la 'If Not For You', a self-deprecating nod to his flirtation with fame as part of Any Touble and then Gregson and Collister, a song of "One too many mornings, one too many songs,/Where every note was soaked in wine" and the acquired wisdom that "It's easy to fall for the myth of immortality, You're looking at the living proof that what will be will be,/And every scar upon my heart cost a fortune for to own". Everybody does, indeed, dream "about their moment in the sun", but I do think he's selling himself short to say "Now I'm ploughed and scattered, like all the seeds I've sown".

Taking his cue from Patty Matheson, 'Rock & Roll' is an acoustic chugger love song to, well, rock & roll, along with "rhythm and blues and northern soul/Protest songs and jelly roll" that namechecks Gibson, Fender, Rickenbacker, Gretsch, AC30, Tamla Motown, Sun and Stax, not to mention a dizzy Miss Lizzie and wanting to hold your hand and the joys of catching the rocking pneumonia, and I'd assume the boogie woogie flu.

Slowing it down, 'As Evening Shadows Fall' looks back to his seven years as Gregson & Collister, a gorgeous, wistful, keyboards backed reflection on restless days and reckless nights that evokes their finest work. "We were the greatest thing,/We were the best", he sings; he's not wrong.

The midtempo walking beat, mandolin-accompanied 'Friday Afternoon' casts his mind back further, to making the move from Manchester to London "With only that week's wages to my name… with no purpose and no plan,/Just a vague desire to seek fortune and fame". He continues to tell how "too many lonely nights dimmed my flame,/When I slipped from hanging in to barely getting by", but even so, if he could go back to that Friday and start again, he'd not change. It's a theme that carries over into the laid back shuffle of 'The Bird Falls From The Twig,' a musing on what he might have been had he not picked up a guitar and become a travelling musician, "Out on the blistering road,/Caught between the tanker and the rig…forever homeward bound", only to conclude that "I'm right where I'm supposed to be". Absolutely.

Given a slight calypso- chug with some bluesy guitar, 'When The Medicine's Working' nods to when he used to drink in the belief it would make the music better rather than "Pushing this rock up an endless hill". In the notes, he remarks how it just made him a better boozer. Actually, he stopped drinking back in 1985. Besides, his music doesn't need an alcohol fix, it has a very specific gravity of its own.

Having mentioned the joys of spending your life staring down the tarmac and white lines, looking for the chance to maybe do a little overtaking, led by piano, the country soul 'Any Kind Of Life' was actually written while he was stuck in an M6 traffic jam en route to a gig, serving as another reflection his calling as he sings "The moment that I found my voice,/I never really had a choice,/I packed my things and ran along,/Always chasing after one more song".

Taking the pace up slightly, 'Rise & Fall' is basically about the vagaries of life as a working musician, "Where anything is possible but nothing goes as planned". He may sing about "tumbling down to earth", but, as Elton put it, he's still standing, looking like a true survivor.

The Rolling Stones hit the nail on the head when they titled their 1996 album Rock and Roll Circus, an idea Gregson picks up and runs with for gently soft shoe rolling 'The Circus Is In Town', a reminder how of a rock show, or indeed live music of any kind, can take you away from your troubles, "forget your woes… lighten up your load", where you can "Sing along with the crowd, act the fool, dancing's allowed". Over to you, ringmaster.

The fingerpicked guitar and mandolin 'Wings' again looks back to "When fortune came a-calling,/I knew what I must do…/With nothing but a six string/And a black Lloyd Johnson suit/I was off to find Nirvana". For those whose knowledge of the sartorial arts is not what it might be, Lloyd Johnson was a London fashion designer from Hastings who, starting out in 1966, changed the look of rock'n'roll fashion, designing for the Beatles, Dylan, the Stones, the Faces, Bowie and, more recently, the Oasis fake fur coats. He also designed the clothes for the film Quadrophenia.

Meanwhile, back at the song, it's about the time when you took chances regardless of the risks, though now he's "just glad to be here/In my rock and roll shoes". Adding that "if you ask me for another song/Well, how could I refuse?" And, so, naturally, the album ends with 'One Last Song', a lope-along, organ-tinged folksy pop celebration of "simple pleasures, all night long", with "beer stained blues and heartache" songs of "sad stories, tales from the edge/Lovers and losers, life on the ledge".

While he may be preparing to retire from solo touring, the first four of his musical grand slam show Gregson's on a real roll right now, albums that stand alongside the very best of his career to date. Here's to many more one last songs, then.