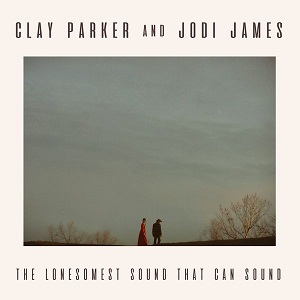 
Both established artists around the Baton Rouge folk scene in their own right, Parker and James joined forces some four years back, making their duo debut with a self-titled EP. With the blending of their voices and the sound they craft, both that and this, their first album, casts them firmly in the same cosmic country arena as Gram and Emmylou - and they can easily stand the comparison. Woody Guthrie is another touchstone, the album taking its title from a line in Guthrie's 'When the Curfew Blows'.

With Clyde Thompson on fiddle, Paul Buller playing pedal steel, mandolin and electric guitars, Ben Herrington on organ, drummer Micah Blouin and Davin Hinson on upright bass, the collection opens with James taking drawled lead on the languid 'Easy, Breeze' where you might well discern hints of The Band 'Easy, the lyrical imagery drawing on the 2016 flooding of southeast Louisiana.

Shifting to a classic midtempo chugging rootsy strum, again with James's soothingly lived in and slightly warbled folksy soprano on lead and Parker providing subtle harmonies, 'Katie's Blues' is one of several highlights, a song of gentle sadness and wistful wisdom ("make it a choice not to choose") that sounds as though you've known it forever. Parker makes his first lead appearance as they trade verses on the pedal steel streaked honky tonk shuffle of 'Every New Sky', the album shifting into folksier shades with James up front and the pair harmonising on the fabulous 'Gallows Tree' with its gently tumbling chords and if lyrically downbeat sketch of someone who always looks on the darker side of things.

Parker steps back into the spotlight on 'Far Away', the drums kicking in part way through as the melody line briefly lifts on pedal steel wings before ebbing back into the lyrical melancholia about leaving and the physical and emotional distance that eventually means you can never go back.

A song born of the pair both recovering from emergency surgeries and the associated pain management, 'Cumberland Mill (No Pain)' shifts the soundscape into a hazy, disassociated strung out blues feel underpinned by fiddle and bass. It's followed by yet another standout, 'Down To The Garden', a number inspired by the line in Joni Mitchell's 'Woodstock' and drawing on folklore garden imagery, from Genesis to Appalachian murder ballad 'Down By The Willow Garden' (aka 'The Ballad of Rose Connelly'), as well as a references to Lynn Anderson's classic while the bluesy, slow bubbling melody line recalls the swampy underbeat of Nilsson's 'Coconut'. It's also their eco comment number with the final verse casting an eye over the damage caused by the many chemical plants lining the banks of the stretch of Mississippi where they live, an area known locally as 'cancer alley'.

A duetted nostalgic reminiscence of younger, innocent days at the point of no return ("it's a long clear night and there ain't no one where I'm going to"), 'Remember It All' returns to a simple, circling guitar pattern strum, leading into Parker's delivering of the Guthriesque fiddle-accompanied jaunty drifter's lament 'Yazoo City', which, if you're not from those parts, you probably won't know is actually a place in Mississippi.

It ends in epic form with the harmonised sparse twelve-minute 'Killin' Floor', a slow acoustic guitar waltz song of leaving, loss, betrayal, heartbreak and hurt, the lyrics floating the album title in a pool of despair.

One of my favourite albums of the year and the start of hopefully a long musical relationship, discovering albums and unknown acts like this, which emerge like a diamond from amid what can often be a mound of mediocrity, and encouraging others to share the experience is what makes being a music writer so rewarding. Check them out and spread the word a little further.