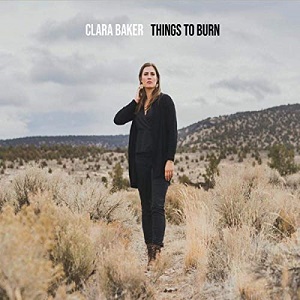 
Any album with the tag “indie folk songwriting rooted in the natural world” will carry certain sonic expectations even before the lyrics can be sung, deciphered and assessed. And (in a way) Portland, Oregon songwriter Clara’s latest album – her second, I believe – confounds those expectations at a stroke. Opening on a slow-burning, soulful mood with electric piano, bass and percussion cradling Clara’s delicate shaded singing, it’s not at all like you’d imagine a folk record to sound. But so what? – for it’s the sensibility that counts, and Clara’s total immersion in the storytelling aspect of her songs is a folk process in itself. As that opening track progresses, there’s a jarring, edgy section that brings in discordant electric guitar, actually quite disturbing.

But generally – and here’s the paradox – the whole record has an amazing feel of repose and stillness, a oneness with the environment – indicatively so, since we learn that it was recorded at the home of the mother of avant-folk experimentalist and Kalispell frontman Shane Leonard in a tiny Wisconsin village, and tracked live to tape to capture the spontaneity of creation and the feeling of being in the moment. Highly appropriately for Clara’s lyrics, then, with their imagery drawing on the rise and fall of the seasons and the questioning of natural events. As the album was being recorded, Clara was looking out on a large frozen lake as it slowly melted day by day, passing from winter into spring, and observing the life on the lake. The tasty, intimately atmospheric musical contributions from Shane and his fellow-musicians Courtney Hartman and Zachary Hickman are augmented on one song (More Than Enough) by Anna Tivel and Jeffrey Martin, who dropped in while on tour in the area, otherwise it’s just Clara and the basic trio, with textures pared down yet richly complementing her striking imagery.

Style-wise, Clara’s songs aren’t easily describable, although they definitely owe more to indie than strict folk or even singer-songwriter mode. Having said that, there are some tracks (A Memory, Old Mountains) which employ Joni Mitchell-kind of guitar figures and melody lines for their broodingly relaxed ruminations on situations of existence and being, like the eternal dichotomy between faith and doubt that had preoccupied Clara from an early age but which through her writing she’s clearly learned to embrace. The pair of tracks at the album’s emotional heart are the drifting, pensive, shimmering More Than Enough (which explores love as a state almost as natural as breathing) and the ethereal, haunted (and actually rather chilling) clatter of Middle Of The Night, which piquantly represents the restless state of near-insomnia as Clara tries to cope with nostalgia, grief and the pain of loss. As in actuality, there’s almost too much going on, even in its spare folktronica setting. Further soft percussion embraces the stagnant patterns of Six Days Of Rain, and the desperate, slightly detached air of I Won’t Take My Time recalls vintage Cowboy Junkies.

Clara Baker has given the receptive listener a privileged entry into her raw and fragile world with Things To Burn. Go trust her generosity of spirit and get hooked on her vision.

I Won't Take My Time With You For Granted