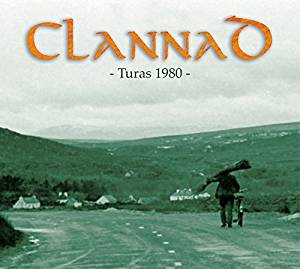 
Turas 1980 is a double album to be released in July 2018 of a live concert given by Clannad in Munich in 1980. It will deliver a wonderful walk down memory lane for fans of the band but will disappoint those hoping to hear the ethereal "Harry's Game" theme which was released some 3 years after this album was recorded.

Although Clannad was formed in the 1970's by the Brennan and Duggan families, they only really came to worldwide prominence in the following decade. I first saw them in concert in the mid 1980's and then saw Moya Brennan again in concert last year. It is wonderful to report that the mesmeric quality of her voice has not been diminished by time. It is still quite magical.

This album despite being recorded in 1980 has not been released previously and takes Clannad back to their pure Irish folk roots. The tapes of the concert have only recently come to light and fans of this type of music will love this album.

The whole album is live and includes the comments and links delivered by the band with their soft and delicious Irish accents. Some are even delivered with a touch of humour that would please Dave Allen. It really does make you feel as though you are sitting in the audience watching something very special whilst downing a pint of Guinness perhaps.

The band's musical prowess cannot be denied, pure quality, even if you probably need to understand Gaelic to follow some of the lyrics. This however does not matter as the vocals, especially from Moya, just soar and take the listener to a different plane.

The release of this album will not only remind listeners of how good this band really was but it will also serve as a memorial to founder member Padraig Duggan who sadly passed away in 2016.

If you are a fan of Irish folk music, it does not get any better than this.