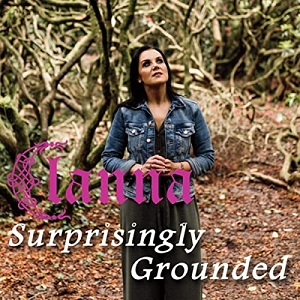 
A singer-songwriter from County Armagh, Clanna (it's Clare Hanna) cut her teeth playing traditional Irish and Country music, the family band performing alongside the likes of Philomena Begley and touring with Dominic Kirwan. She also had the unique honour of writing the first song ever to be released online by the British Government, written about the families and victims of knife crime in London, as part of a Criminal Justice System project as well as penning 'We Are The Irish' for the Irish Olympic team.

This is her second album and a mix of self-penned material and contemporary country covers, kicking off with a piano backed version of Alan Jackson's 'The Older I Get', revealing an attractive Irish songbird warble. Again accompanied on piano, it's followed by the first of her own songs, 'I Always Want You Near', a more folk pop inclined love, and then it's back to the covers for the first of two Ags Connolly numbers, a gently fingerpicked slow waltzing 'Get Out Of My Mind', the other, on a similar note, being 'That's The Last Time.

Elsewhere, she turns attention to highly listenable versions of Irish folk nuggets such as the piano and strings arrangement of Mary Black hit 'Once In A Very Blue Moon', Christie Hennessy's tender 'Remember Me' and Maurice Dickson's 'Wine and Roses'.

She's a solid songsmith too, and particularly worth mention are the pedal steel accompanied break-up song 'Don't Have It In Me' and album closer 'You Stood By My Side', a poignant orchestrated piano ballad inspired after hearing a corona virus survivor describe their fight, the ensuing depression and their gratitude to those wouldn't give up on them.

If there's a criticism, it's that it all tends to be of a similar pace and it would have been good to hear what she does with a more uptempo or honky tonk styled number, but it's fair to say fans of Irish country will find this highly appealing.

Get Out Of My Mind