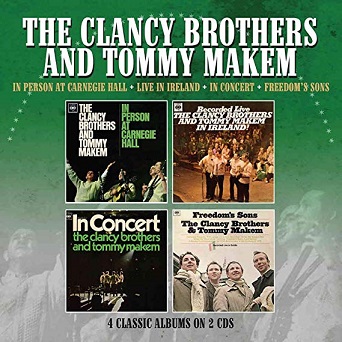 
Classic good-time Irish music personified – Paddy, Tom and Liam Clancy from Tipperary, when teamed with Tommy Makem from Co. Armagh, sure made a heady brew. They were the originals, and we can see that they paved the way for many acts to follow, most notably The Dubliners and latterly The Pogues – and of course countless populist imitators, from the indifferent renditions of whom the “Irish trad” label has gained its notoriety among enthusiasts of “real folk music” (whatever). To give their achievement some historical perspective, the foursome got its big break in March 1961 with a career-making appearance on the Ed Sullivan Show (after which, legend has it, sales of Arran sweaters rocketed too!).

But even now, not many folk fans realise that this celebrated foursome actually had its origins in America. Paddy was in the States working as an actor, when in 1956 he established his own label, Tradition Records (on which early recordings by, among others, Odetta and Josh White appeared). By then, brothers Tom and Liam had also joined Paddy; Liam had met Tommy while collecting Appalachian folksongs for Paddy and Tradition, and the ensemble soon became established in Greenwich Village (Liam became firm friends with the young Bob Dylan, and introduced him to songs like Maid Of Fife-E-O). The Clancys and Tommy together built a strong rapport with their audiences from the start, with a fearsome reputation as purveyors of what then was perceived as the real-deal in Irish music. After recording three albums for Paddy’s Tradition label between 1956 and 1961, two live albums followed on from the Ed Sullivan Show date – one of these was nominated for a Grammy. The group’s next record was 1963’s In Person At Carnegie Hall set, which in its entirety kicks off this great two-disc release from the Cherry Red subsidiary Morello. It includes rousing fare like The Juice Of the Barley, Reilly’s Daughter and A Jug Of Punch alongside rebel songs (Johnson’s Motor Car), a medley of children’s songs, Dominic Behan’s Patriot Game and The Parting Glass.

A grand time was had by all – and yet the next LP in this collection, Live In Ireland, recorded in 1964, finds the Clancys on even more fiery form and thoroughly at home with their Belfast audience. It starts on The Wild Rover (this is where it started!) then proceeds with plenty of hearty audience participation through a series of classics done in typically lusty, riproaring fashion. There’s Beggar Man and Wella Wallia, and a riotous New Finnegan’s Wake – complete with a passage from Joyce’s novel read by Tom – contrasting with Butcher Boy, Rocks Of Bawn, Tom’s own beautiful composition The Curlew and a fond tribute to Brendan Behan. Song introductions are left in too – all to the good – and the sense of fun is irresistible and infectious, culminating on the music-hall finale They’re Moving Father’s Grave To Build A Sewer (aka My Old Man Said Follow The Van).

The second disc gives us the group’s 1967 In Concert album plus the preceding year’s live-in-Dublin-recorded Freedom’s Sons collection. In Concert contains a host of now-established repertoire staples (Red-Haired Mary, Peggy Gordon, McAlpine’s Fusiliers, Master McGrath, Blackwater’s Side) mixed with group members’ compositions like Tommy’s Winds Of Morning and the irreverent William Bloat, a stomping march-medley, and even the decidedly non-Irish Sam Larner number Windy Old Weather. By the time of this concert recording, everyone knew what to expect, the audience was a little more polite and “settled” (although not unenthusiastic), and the group’s performances were both more polished and more punctiliously controlled. There’s not the same degree of between-song repartee, and there’s not quite the same frisson you get on the earlier live sets. Even so, it’s not a below-par collection in any respect. Freedom’s Sons satisfyingly delivers some less well-established material, taking in the light-hearted rebel song Lord Nelson, Ewan MacColl’s Free Born Man and an ambitious sequence commemorating the 50th anniversary of the 1916 uprising that includes spoken-word from Yeats and O’Casey.

As far as I know, this excellent double-disc release marks the first UK appearance on CD for these LPs; presentation is more than adequate to the task, with a useful and succinctly informative booklet essay that fleshes out the basic tracklist credits. Hopefully this signals further volumes of Clancy Brothers reissues, but it’s a good representative selection as it stands. Good solid classic “Irish” folk repertoire doesn’t come better than this – and for those new to the game, herewith its appeal, so these recordings are how to experience it.

Will You Go Lassie