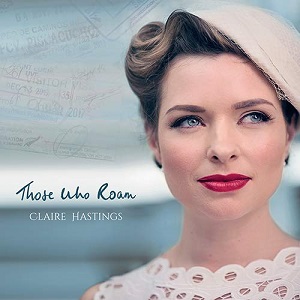 
The second album by the Glasgow-based erstwhile Young Traditional Musician Of The Year dumps the ukulele and, produced by Inge Thomson with backing musicians slimmed down to guitarist Jenn Butterworth, fiddle player Laura Wilkie, pianist Tom Gibbs and Andrew White on accordion, brings an airy feel to its mix of self-penned and traditional numbers.

As the title suggests, it adopts a theme of travel in all its different forms, both voluntary and enforced. The need to travel to find work informs the opening number, 'The Lothian Hairst', a traditional song celebrating the scything squads (cue special effects) of the 19th century who, travelling by boat would, cut the corn from the Lothjains to Aberdeenshire in the north. Sung from the perspective of a female worker, it would appear that there was also little chance for the men and women to sow any wild oats, the song noting how the gang foreman, Logan, would clear "the bothy every night"!

It's followed by another traditional tune, the lively fiddle and accordion driven 'Jack The Sailor', also variously known as 'Jackie Munroe', 'Jack He Went A Sailing' and 'Jackaroe', which tells the tale of a wealthy merchant's daughter disguising herself as a man to serve as a midshipman while searching for her sweetheart, Hastings adding two new verses to the story in which she finds him among the dead and dying and they become a sort of ghostly couple ploughing the seven seas.

Continuing down the traditional path, 'Seven Gypsies' is a variant on much recorded 'The Raggle-Taggle Gypsies in which a lady leaves her laird and feather bed to take off for sexual athletics with a whole gang of gypsy lads, followed, in turn, by the melancholic, piano accompanied 'Sailin's A Weary Life', a familiar account of a woman bereaved by her lover's death at sea.

The first of the two original numbers comes with 'Fair Weather Beggar', a swayalong brogue-accented account of an Edinburgh street busker who only plies his trade when it's not raining because "the finer the weather, the better I'm paid." The second, piano and guitar providing the bedrock, 'Noble Helen of Cluden', draws on Sir Walter Scott's novel The Heart of Midlothian, based on how one Helen Walker (Jeannie Deans in the book) allegedly walked 600 miles to London in 1738 seeking a reprieve for her younger sister, Isobell, who had drowned her illegitimate child in Cluden two years earlier. There's no court record of Helen, but Isobell was indeed pardoned and banished.

It's sandwiched between a further two traditional songs, the first, 'Logie O'Buchan', reportedly written by George Halket in the 18th century retreads the familiar tale of lecherous landlord who forcibly comes between two poor lovers, the hero of the tale, Jamie, supposedly based on one James Robertson, Halket's gardener.

The second delves into the rich field of transportation ballads for another Jamie, here Jamie Raeburn, a spare, achingly sung piano ballad account of a Glasgow baker allegedly sentenced for petty theft and forced to emigrate "far frae the bonnie hills and dales o'Caledonia."

By way of a complete contrast, the album's only cover is a rousing take on 'King of Calfornia', the gold rush-themed title track of Dave Alvin's 1994 album. Percussive guitar, fiddle and piano carrying it aloft. It ends, appropriately enough, on a song of farewell, a final dip into traditional waters with 'Ten Thousand Miles (aka 'Fare Thee Well'), Hastings' three part harmony vocals unaccompanied save for a distant atmospheric wash of treated fiddle.

Reflecting her 40s-style attire on the cover, it's a more sophisticated sound than Between River and Railway, one which should please her established traditional-folk audience but also attract listeners beyond these borders.