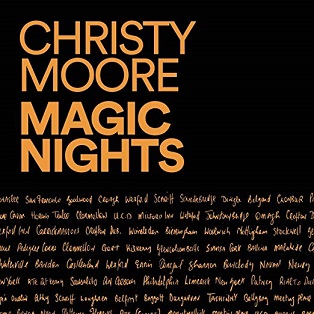 
Even the most long-standing and devoted of admirers of the quintessential Irish folk icon have an insatiable appetite for more, and the man could release a new live album every couple of months and still leave his fans clamouring for more. Although I'm not in the hardest-core inner circle of Christy Moore devotees, his music still gives me constant pleasure and each successive listening experience seems to reveal something new, some precious and telling detail that I may not have noticed previously. And for an artist currently celebrating 50 years of recording, it's one hell of an achievement to still never give the impression of "same old" either in live performance or in the studio (even though Christy freely admits he never feels entirely at home in the recording studio).

So the stage is Christy's ideal natural environment, then. It's the winning combination of polish and spontaneity, easy accomplishment and hard graft, that sets the special performer apart from the crowd - and Christy's always been one of that select few. He sets great store by "the mystery of it all", crucial elements such as the air of expectancy and the team-work that make "facing the music" such a buzz, such a massively rewarding and pleasurable experience. Right-on!

Every gig develops its own atmosphere, since every audience is a unique gathering of listeners. Christy and his team have recorded all his gigs in recent years, and thus Magic Nights could not be more aptly named (and its lead track could be no other than the John Spillane'Ger Wolfe composition that evokes so many gig memories). Selections for this new two-disc release - a natural follow-on from 2017's On The Road set - have been drawn from careful listening-back to literally hundreds of individual gigs over a number of years. In the process, Christy with his producer Jim Higgins and sound engineer David Meade happened upon all manner of felicitous details - one-off harmonies, notes and riffs - that made each performance distinctive and special. They found songs that hadn't hitherto made it onto record but which had rapidly attained the status of live favourites; radically different readings of songs that had been in the repertoire for ages; and even songs that were "busked" impromptu following ad-hoc audience call-out requests (like Dan Penn's Cry Like A Man). The final selection comprised just 26 songs, and the individual performances are assembled together to form a highly credible programme of two 51-minute sets that makes for brilliant home listening while unerringly illustrating the consistency and timelessness of Christy's delivery - you can sure appreciate the difference between "same-old" and "quintessential" when you hear a master like Christy at work.

The discs contain plenty of set-rarities and one-off moments. Firstly, songs seldom sung because "it needs a certain air, it needs the room to be right upon the night"; this category includes early-Pogues classic A Pair Of Brown Eyes. Secondly, songs being outed for the first time - and, as in the case of Albert Niland's Sail On Jimmy, being taken up enthusiastically by audiences. Of course, Christy's knack of discovering really excellent songs is everywhere in evidence - Sean Mone's tale of Rosalita & Jack Campbell is the finest of several examples on this set alone, and, like Pete St. John's Inchicore Wake, is a recent acquisition. His very special way of making a song his own is also present in abundance - I could readily cite any of the already-mentioned, plus Natalie Merchant's Motherland, Jackson Browne's Before The Deluge and Trent Reznor's Hurt (long associated with Johnny Cash), to name just three more.

And then there are the established favourites, often given a fresh and vital new spin - for instance, the chilling Burning Times gains even deeper emotional resonance as a response to the murder of Lyra McKee just a few months back, and Bobby Sands' Back Home In Derry could not be imagined more feisty and heartfelt .than in Christy's hands. And even a chestnut like Spancilhill reveals fresh beauty and heartbreaking insights in this atmospheric 2016 Glasgow Barrowlands outing, while Christy's solo repertoire-pillar The Well Below The Valley will never fall out of favour with either performer or audience; neither will Christy's delightfully puckish bodhrán-bedecked take on the John Reilly/Grehan Sisters standard Tippin' It Up To Nancy. At the same time, it's great to hear again seldom-sung items like The Two Conneeleys (jointly penned with Wally Page in the early '90s) and the formerly more frequently aired but now newly restored Missing You. A new solo take on The Reel In The Flickering Light is the only selection to depart from the totally-live scenario by incorporating studio overdubs from other musicians; here a gentle prominence is given to Joleen McLaughlin's harp.

Great presentation, great songs, great music - what more could you ask for? What a presence, what a package. Magnificently magic.