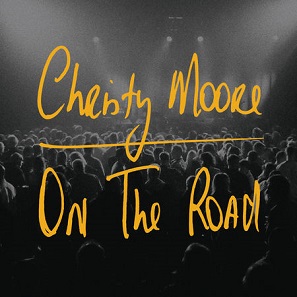 
This is a definitive two-disc set that without any doubt encapsulates the special appeal of Christy Moore as an unique, unrivalled live performer. While in a real sense it’s the next best thing to being there (at times), it might however be thought something of a compromise, a cross between a live-in-concert album (it’s compiled from shows at 17 different venues in England, Ireland and Scotland over the past three years), a greatest-hits package for the Christymas market, and a “Christy’s most popular songs” dip-in primer aimed at those yet to make his acquaintance. It’s all of these and yet none of these! Inevitably, there’s a feeling of artificiality in the almost predictable, managed sequential alternation of quiet and lively, thoughtful and throwaway that you don’t get to the same extent in a continuous live set. Not that this is necessarily a problem, but On The Road is thus best taken as a series of snapshots in a photo album which you can flip through, lovingly linger or dwell on or skip entirely according to your predilections or your mood at the time.

It shouldn’t need saying that Christy is a consummate master of the art of involving his audience, whether on record or live in concert and on different types of material. His distinctive vocal delivery – hushed, puckish, twinkle-in-the-eye confidential, creamy tone and smooth, charming brogue – is capable of pindrop sensitivity and nuance but also a fiery thrust when more earthy sentiment is called for. This two-disc collection vacillates betwixt and between, but every track is memorable for some reason. That might be purely musical (a different arrangement, for instance) or artistic (in the sheer spellbinding sense), or it might be the sense of a special occasion with unique topical references or customised alterations to the lyrics (Don’t Forget Your Shovel, for instance, has been rewritten to include some current political in-jokes). And the live audiences are in full-throated voice on a good number of the selections – Ordinary Man’s rather like being at a match… even to the extent of causing Christy to change back to singing an earlier version of the words at one point!

Every Christy Moore fan will have personal preferences among his vast repertoire. For me, there are songs that I just couldn’t imagine being without – songs which Christy owns, with which he has developed a special rapport, like the enigmatic Jimmy MacCarthy songs Bright Blue Rose and (of course) Ride On; Barney Rush’s Nancy Spain; brother Luka Bloom’s City Of Chicago; traditionals Black Is The Colour, Raggle Taggle Gypsy and The Cliffs Of Dooneen; Ewan MacColl’s Go, Move, Shift; Peter Hames’ Ordinary Man; Colm Scullion’s North & South (Of The River); and best of all, Richard Thompson’s Beeswing. There’s a grand take on Shame McGowan’s Fairytale Of New York recorded just days after Shane’s mother died. And a sprinkling of Christy’s own compositions (Viva La Quinte Brigada, Time Has Come and Lisdoonvarna). On the other hand, there’s a number of songs that just don’t do it for me, being either too “occasional” (tied to the occasion or atmosphere of that particular gig, perhaps), whereby you wouldn’t necessarily want these as souvenirs in your collection. In which category I’d unhesitatingly place the tiresome football saga Joxer Goes To Stuttgart – though I’d concede that for some fans a Christy gig wouldn’t be complete without it… (and then again, I’m a confirmed ludophobe!). And for that matter Weekend In Amsterdam, Delirium Tremens, St. Brendan’s Voyage and comparatively new acquisition Lingo Politico (sorry!). And the resurrected If I Get An Encore feels rather dated, however relevant its sentiment still after some 30 years of life.

The band backing Christy on most of the set’s selections consists of trusty long-time musical companion Declan Sinnott (various guitars), Cathal Hayden (fiddle, banjo), Máirtín O Connor (accordion), Seamie O’Dowd (guitar, mandolin, harmonica), and Jim Higgins (percussion), with some vocal contributions from Vickie Keating and Christy’s eldest son Andy Moore. Christy’s own chatty liner notes are provided on his website; these give anecdotal background to the individual songs, together with the kind of fascinating, often humorous incidental asides that you might get in concert performance, and in just a few cases the venue (though not the date) is identified.