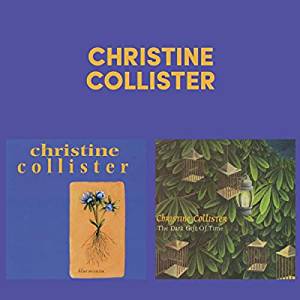 
Christine Collister is currently leading a double life. She performs both as a solo artist and as a member of the five women band "Daphne's Flight." Christine has been performing since 1984 producing in that time some 20 albums. This latest offering is a rerelease of two earlier albums originally distributed in 1986 and 1998 respectively.

I first heard Christine at our local theatre a number of years ago. I have to confess that I had never heard of her prior to the gig but wanted to support our local venue and its promoter. As soon as she came on stage and started to sing I was immediately won over by the quality of her voice and her stage presence. She not only seemed to be a nice lady, which I later found out she was, but she was one of those artists that is totally comfortable with both herself and her music. She exudes natural warmth! She was accompanied by a single guitarist which allowed her voice to be heard in all its solo glory. She really does possess a fabulous voice that offers an immense range coupled with pure clarity.

Her songs are a mix of folk, blues, country and a little light rock. I believe that versatile would be the best way to describe her and her musical style. She is renowned for her ability to put a new slant on other songwriter's music and has successfully covered songs by Smoky Robinson, Nick Drake, Robert Wyatt, Tom Waits, Paul Simon, U2 and Lal Waterson, with her own wonderful interpretations. A couple of outstanding songs that show off her ability to deliver a totally different approach to a well know song are "Harvest For The World" the Isley Brothers classic song and Billie Holliday's emotive "God Bless The Child."

One critic from The Times described Christine as "Having a voice that is a personally delivered by God." Her voice offers emotion and lucidity in equal measures on both fast and slow numbers.

It is always possible to determine the quality of a true artiste by checking the other singers or musicians that they have collaborated with. In Christine's case, she can claim both Richard Thomson and Dave Kelly as collaborators. That is a clear indication of the pure class of this lady.

It is difficult to identify a track on a double album that would most adequately showcase Christine's voice and approach to music, but her version of "Broken Bicycles" by Tom Waits might just do that. A stunningly beautiful rendition of this song.

So in summary, a really nice lady with a fabulous voice that can melt even the hardest of hearts.