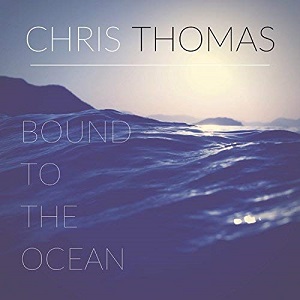 
Bound To The Ocean is native Devonian Chris Thomas' debut album, though he's no stranger to performing. Having been in a few bands in the nineties and noughties, he became involved with In The Flesh, the Pink Floyd tribute show that has been performed in some of the UK's finest theatre venues. Since going solo back in 2013, he's still performing regularly throughout Devon and the South West with a more intimate and contemplative set.

It's clear that some of these songs come from a very personal and emotional place. The opener, Whenever I Sing Georgia, is a tribute to the step mother who raised him from the age of seven. It's a chirpy track, but with a whole lot of emotional depth behind it. Later on the album we also have one of the best tracks, Gwendoline Rose, written about his then six month old daughter. It's wonderfully upbeat and the melody is guaranteed to stick in your head.

The title track is another highlight, an ode to his home town by the sea, and the halcyon childhood days spend jumping into the water from the highest point possible. Listen To Me is a gloriously simple piano led tune about the loneliness and frustration of trying to sing while the audience are more intent on their own conversations. There's even room for a folk gem, with Back Before The Storm featuring a haunting flute and whistle combination that gives the track a mournful quality.

A glance at his gig calendar online shows that Chris Thomas is a very busy touring musician, and on this form it's easy to see why. Bound To The Ocean is a strong debut, featuring very engaging songs with repeat value. This is far from a one play and done album. If you find yourself in the Torbay area he's probably performing somewhere, and if his debut is anything to go by, you'd be crazy to miss the chance to see him sing live.

Bound To The Ocean