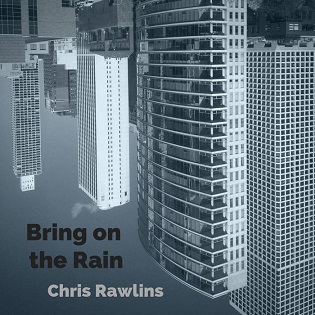 
`A native of Kalamazoo, Michigan, now based in Chicago, Rawlins is fingerpicking singer-songwriter troubadour of the old school , his songs drawn from everyday observations, his laid back melodies easy on the ear, his gentle, grainy voice variously evocative of Eric Andersen, James Taylor and, on the tone and phrasing of 'Don't Forget', a folk country inflected Leonard Cohen, even if the track echoes 'Don't Think Twice It's All Right'.

Produced by Steve Dawson, his debut album opens with the rhythmic chug of 'Gravity of Something', a love song of sorts where he muses "Is that the person you've been sleeping with, you won't know him till your sick of it." The imagery of smoke curls over into the similarly romantic (and slightly jazz tinted) ambiguity of 'Bring On The Rain' ("you're not talking/You knew it would end up like this…And you're not listening/You expect way too much from this") that throws in such off kilter lines like "Hey, but look at you, you tied up both your shoes."

You might hear shades of John Denver or maybe Glen Campbell's 'Gentle On My Mind sneaking around the pedal steel coloured mid-tempo 'Almost Anytime' before the lazier drift Leave, a song about a spat in what would seem to be an otherwise solid marriage and, back to folksy fingerpicking for the viola accompanied 'Cold Night' on which he disarmingly sings "You'd leave me if you knew me better than you do."

His lyrics have a poetic touch, an unusual phrase here, a poignant use of imagery there, his melodies simple but as soothing as a comfort blanket even when the songs might be dealing with splintering relationships and desperate need to cling on "Maybe time is all you need/To pretend you're on your own/Someone alone who gazed out on a night/And there's something that you see") or kept from falling ("I'll live and die/And you'll touch me when I get home tomorrow").

It ends with, first, the keening pedal steel and twangy country guitar of You & Your Heart' ("Your eyes are like a window breaking/It's cold out and your skin is shaking") and, finally, the plaintively lovely 'All You Are All' with its heart bruising chorus of

The years sent honing his craft playing the folk clubs of New York and Chicago are clearly evident in his relaxed style and effortless musicianship, a debut album that suggests a very bright future indeed. Let it pour.