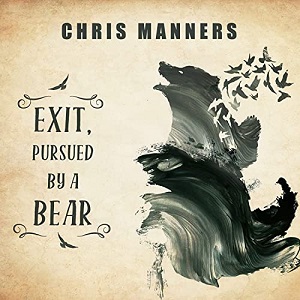 
Now here's an event for which many of us have been waiting a very long time ("it would be quicker to build a cathedral", quips the man himself!) … The release of a new Chris Manners album - one which, we learn, has been "recorded painstakingly between the end of the Industrial Revolution and mid-2019". For, "bear"-ing in mind that Chris has been "knocking around the folk scene for years" (his songwriting career dates back at least to the mid-1990s), it might well be considered surprising that this is only his third album (not counting a pair of records with his "occasional" band Clogiron).

At a casual glance Chris might be considered an archetypal "man-with-guitar" singer-songwriter figure. I guess you could use that term in the good old-fashioned way, as a no-nonsense craftsman-songmaker in the WYSIWYG bracket who gets up on stage with an assured and entirely confident air, and just "gets on with it", royally entertaining while providing food for thought. Chris's songs carry a distinctive styling; they marry crisply contoured (and audibly supportive) guitar playing and generously listenable tunes to brilliant, savvy wordsmithery, sharply perceptive yet affectionate and compassionate lyrics with plenty to say, couched in choice turns of phrase and accessible, memorable imagery. All of which is delivered with a winning blend of wit and sensitivity, intelligence and true musicianship that inherently displays a high level of awareness of, and respect for, tradition (that of folk and folk-rock and its antecedents).

In the versatility stakes too Chris rides high - for he seems equally at home writing poignant commentaries on the decline of trades or industries (England's Last Apprentice); imaginative ruminations on ambition (Nothing's Ever Still) or aspiration (Exit Pursued By A Bear, a study in ignominious pathos with a distinctly Thompsonesque gait - and it even namechecks Bohemia too!); genially sardonic observations on the trials of life (Fifty Shades Of White, a delectable patter-song in the time-honoured traditions of music-hall and Flanders & Swann); cheekily, knowingly referential cod-maritime fun (Not Half So Cruel As Rose, a succulent slice of seafaring sauciness which might recall both The Calico Printer's Clerk and The Famous Floating B); or love songs, either wistfully comforting (Mountain Rescue Dog) or of a deceptive depth (Jigsaw) which may nevertheless be laced with (sometimes quite cutting) humour.

Three of the album's standout songs expand Chris's ambit even wider: the cunningly-named Trad Arr is a heartfelt paean to the folk songmaker's craft - and a true earworm - whereas magnum opus Friendly Fire is an angry, explosive, passionate exploration of the implications and meanings of that term, a stupendous folk-rock number that crosses Little Johnny England with Merry Hell and even finds room for a storming Telecaster solo that bursts savagely out of the mix midway. And talking of epic song-journeys, Chris loosely bases the intimate narrative of On Fathers' Day on his father's own father who triumphantly rose above his workhouse-boy origins (and there's also something of a RT feel to the chorus' melodic progression here, methinks). That track shares with "theme song from an unpublished novel" When I Get Home an unusual split-chorus-and-refrain structure that keeps you on your toes.

In Chris's writing, the carefully-chosen words may sometimes infer or else leave things unsaid - which is another measure of Chris's songwriting skill; and, where his lyrics happen to be driven by a more personal angle, they do so without resorting to navel-gazing (how very refreshing!). Over the years Chris has developed a discernible writing style, which renders so many of his songs "unmistakably-Manners", yet he's also unafraid to broach unaccustomed subject-matter, for example Lantern And The Moon, written in the persona of Napoleon when exiled on Elba, or the gently evocative poetic benediction Caribbean Rain. Chris is also ever keen to develop his craft, to which end he recently embarked on a week-long course run by Ray Davies, and two songs here - the curiously affecting Looking For Mrs. Pearce and the electric-fuzz-riffed Townshend-Thompson-garage cross Time To Deliver - arose from specific writing challenges set during that week.

Chris has produced some really outstanding new songs over the past 10 years, and this latest CD proudly presents them in a really attractively designed digipackage, sporting finely balanced studio recordings masterminded by the sympathetic production ear of Jon Loomes (who also contributes a measure of violin or accordion to a couple of tracks). There are no frills or studio tricks, and several songs feature just Chris and one of his assortment of guitars, but on a number of tracks there's careful and selective augmentation by the stringsome talents (and part-time harmony vocals) of long-term Clogiron partner Tim Blythe. And glory be! there's a great bonus track, in the form of live staple Nothing's Ever Still (another instance of Chris's ear for a singable chorus); this recording is drawn from the second Clogiron CD (whence it had lain buried for rather too long IMHO), and (cue spoiler alert!) this is followed by another (hidden) cheeky little bonus track - an unconsidered trifle (quite literally!).

I might go as far as to say that Chris is one of the unsung heroes of singer-songwriterdom, although I think also he secretly quietly enjoys a certain "best-kept secret" status among cognoscenti - a profile which may well be set to rise significantly if this excellent album gets even a modicum of the attention it so richly deserves.