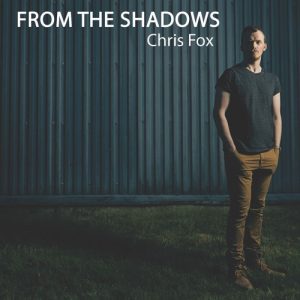 
Chris Fox is a songwriter from Cambridge who has started to attract a lot of attention playing clubs and, increasingly, festivals. Whilst he is more than capable in holding an audience on his own, he has a real ability with the loop pedal, he can also front various combinations which gives him a great range and this is displayed to good effect on his new album 'From The Shadow'. The ten songs, all self-written, range from melancholy minimalistic to some real up-temp numbers that get the foot tapping.

As with a lot of modern writers it's hard to pigeon-hole this album. They lyrics are well constructed, with strong story arcs, and about very ordinary people trying but normally failing. That puts them in the general area of folk but there a blues / Americana overlay which would make him equally welcome on the Country scene. The best thing to do is listen to the songs, which are all very good, and ignore the labels.

The album opens with 'Bird of Paradise', which was an exercise in writing Americana at the same time as falling for a beautiful woman. He describes the experience of courting her as akin to the mating antics of Birds of Paradise being unique, fleeting and unforgettable.

That feeling contrasts well with another song about a bird, but with a very different vibe to it. 'Little Brown Sparrow' is one he describes better at a live show than I can, but it involves meeting a homeless young girl who was sleeping in a car park. As we often find in this situation there's that worry that giving her some money won't actually help her. There's also that thought in the background of why she's there in the first place. Where are her family or does she not have one? The song is very stripped back, just a voice and guitar which helps capture the bleakness of the situation. It's a very moving song that conveys a sense of helplessness on the part of both people involved.

Quite a lot of the characters in the songs are placed in that position of not being able to control their destiny. 'Tinseltown' takes as its premise the idea that Brad Pitt made it by driving to Hollywood, living in his car and knocking on lots of doors. In this song we follow somebody who isn't as lucky, ends up agreeing to dispose of a body in return for money and is then framed for the murder by the perpetrators. The dream has turned into a nightmare and the bright lights and beautiful women are going to be replaced by a prison cell.

It would be very easy to talk every track on the album because they're all good songs and are there on merit but I will mention just one more which, for me, encapsulates both the musician and the person. 'I'm In Love With You' is a song about an ex-girlfriend who phoned him out of the blue to invite him for coffee; she's done rather well for herself so offers to pay. "Leave your wallet, the drink's on me. There's no money in your love songs." He goes along rather hoping to win her back, but chooses to ignore the diamond ring on her finger. It follows this path of the nice guy never quite winning. There's something else Chris does in this song, and others, where he drops out of the song into a spoken word or two. It has the effect of an aside to the camera, because he's no longer singing but talking to you. It gives a strong sense of connection, of making you part of the story.

The album has been well produced by Dan Wilde, who all play on it along with a strong class of highly talented young performers; John Parker, Zoe Wren, Jamie Welstead, Jasmine Watkiss and Stephen MacLachlan. It's a worthy addition to any collection that will get a lot of plays and shows, yet again, how strong the music base we have is. It's good music that has been presented not just with talent but a lot of fun. The future is looking very bright for independent music.