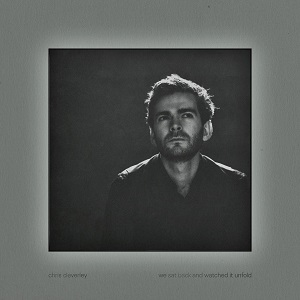 
Chris Cleverley is gaining a reputation as a writer of thoughtful, considered songs that deal with some other the harder issues in life, and yet behind the mild front there is a barely concealed rage at the inequalities and general lack of consideration for those who don't get the help they require. He also couples this with a plea for people to be open and honest about their situation; that asking for help is a sign of strength rather than weakness.

His latest album, which may well have the longest title of the year, is a collection of songs about things that affect us, not always in a good way. Within the eleven carefully crafted tracks he deals with issues such as illness, love, loss, political and social upheaval. They affect us all but we react to them in different ways and I believe the major point he makes with these songs is that is different to, not better or worse than, anyone else. The twelfth track is an instrumental, a chance to take some time out and a moment to reflect.

For somebody who is known as a solo performer, or more recently with his trio, Chris has gathered together a large number of very talented musicians to help him bring this album to life. Amongst the familiar names are Evan Carson, Lukas Drinkwater, Kim Lowings, Kathy Pilkington and Sam Kelly who helped produce, record and mix the album alongside co-writing one track. Of course those last four were also part of the Company of Players ensemble recently, showing how musicians network and help each other out; all part of the ethos of the album.

Opening the album 'The Arrows and the Armour' is a love song with that sense of "the churning; the nervous feeling of butterflies flying" and a plea to the gods that maybe this time it could be different. Of course for love to be true we have to take of the armour and let those arrows find their mark, but isn't that what makes it what it is?

If it all goes wrong you're still left with those memories and that's something Chris explores in 'I can't Take It'. This considers hard times in the form of an illness, so what if we could take a pill to make them go away? It even comes as a cake mix to stir in the unwanted facebook posts and melodies. Chris comes to conclusion he wouldn't take it and then drops out of the song into narrative to ask the audience a direct question. '"Well, could you? I didn't think so." That's a very powerful tool to use because we are now part of the song and having to think about what we'd do. Of course we wouldn't take it because our collective memory makes us who we are, rather than the edited and sanitised version.

This is what Chris does so well on this album. He confronts us with situations we've all come across and had to deal with in our own way. He makes us think.

There's more challenge, and more thinking, in the album's title track This one was inspired by Sam Esmail's 'Mr Robot', a TV programme I'm not familiar with, but the song deals with walking blinkered into a dystopian future that put me in mind of Niemöller's "First they came...". The best ideas can sound good until we realise they aren't working and by then it's too late.

Yes, this is a political album but around the politics of society rather than party, of being supportive of those who can't support themselves and to remember that whilst we're different to each other underneath there's mainly common ground. We feel the highs and lows in the same way. Despite the themes this isn't a gloomy album. It may not get you on the dance floor but Chris' careful considered tone always has that element of hope running through it and we can all take something from it to carry us through the times life gets a bit tough, because we know we aren't on our own. We can make the world a better place for everybody because 'it's our distinctly human, beautiful imperfections that lead us to form our truest, deepest bonds.'

The album was released on the 11th October and is available via the website or on the usual platforms, but Chris is taking it out on the road and you should get to a live show if you can. You'll find an evening of great music and charm which lets you to get behind the songs. Which ever way you get this album it belongs in your collection. Chris Cleverley is in the van of young, modern writers who do things their way whilst maintaining the folk tradition of speaking out for those who need a voice.

In A Dreamlike State