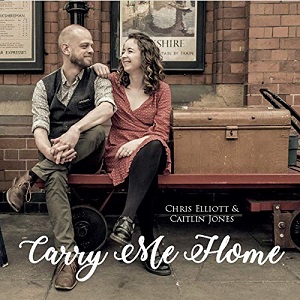 
Amongst the many charms of this fine debut album by Staffordshire duo, Chris Elliott (guitar, bouzouki, fiddle, vocals) and Caitlin Jones (harmonium, whistles) is the endearing cover photograph. The pair are pictured perched upon a vintage luggage trolley at a railway platform. It could almost be a still taken from a forgotten British film of the 1940s in which the understated charms of hearth and home are contrasted with an uncertain world beyond.

Delving into the music within immediately reaffirms that this couple delight in celebrating their home county in song. In his notes accompanying the first track, Chris Elliott writes 'we're both proudly from Staffordshire'. This declaration is amply reaffirmed in the spirited delivery of 'Staffordshire Men'. The song was popularised by musician and author Jon Raven on his 1975 album 'Ballad of the Black Country' and identifies Staffordshire's sons emphatically with the 'forge, kiln and mine' on which the county's prosperity was built. A comparison of both renderings reveals that the passion and gusto of the earlier recording has been recaptured and joyously heightened by Elliott and Jones.

The song that follows, 'Hidden Treasures' written and sung by Jones, focuses on the astonishing 2009 discovery of the Staffordshire hoard of Anglo-Saxon artefacts by modest and unassuming local man, Terry Herbert who had purchased his metal detector in a car boot sale for pennies. While showcasing Jones' charming voice the song conveys the timeless advice that looking beyond an unremarkable surface can off pay unforeseen dividends in abundance.

A keen sense of history permeates much of this rewarding album and this quality is most satisfyingly felt on a pair of tracks that detail the personal histories of relatives of both Elliott and Jones. 'Helping Hand' chronicles the career of Elliott's father in the railway industry, during which time he successively experienced transitions from steam to diesel and electric. Here again a sense of the fortitude and resourcefulness of Staffordshire men in the face of physically demanding work is powerfully evinced. No less evocative is Jones' 'Maggie Manson', an epistolary composition inspired by the discovery of a trove of letters written by Jones' Victorian grandfather to his wife to be. Jones' vivid and characterful reveal that one letter regaled the beloved Maggie with details of a new job as a railway clerk, making the album cover photography seem all the more pertinent.

This being a folk album, it comes as no surprise that the pen of Chris Elliott turns to the theme of social injustice before the album reaches a conclusion. Elliot's composition, 'Let's Get Together' is written from the perspective of Tom Palin, instigator of an 1821 protest by Shropshire miners and their families against exploitative pay cuts. To a stirring melody, delineated by Jones' sensitive whistle playing, Elliott recounts the appalling events with compassion and sincerity.

In all, this is a strikingly accomplished first album, amply displaying the impressive compositional talents of both Chris Elliott and Caitlin Jones. Key to the pair's appeal as both singers and songwriters is the unaffected way in which they are able to inhabit the characters that populate their songs. In looking to the past they promise much for future releases.

Tim Carter ('Off the Beaten Track' on Somer Valley FM (www.somervalleyfm.co.uk) every Monday evening at 6pm.)