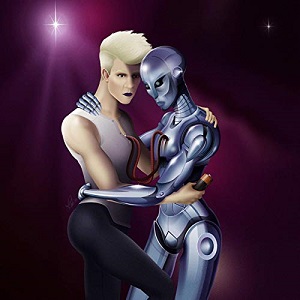 
Two years ago with Tarred & Feathered, Cherry Head Cherry Heart showed themselves to be the masters of catchy indie pop anthems. While It's Complicated still maintains an impressive hit rate of ear worms, this album represent a clear evolution of style for the duo. The touchstones are still there though; the vocal harmonies still shine out, and the music will still leave you tapping your feet in appreciation (yes, both of them).

Keep On Moving is a good opener, almost acting as a bridge track from the first album. If you were expecting more of the same though, that is soon dispelled. Asteroids is the next track up, and it ramps up the electronic sound that is laced through the release. Aptly described as space pop, it's an insanely catchy tune. Flickerbook is another electro pop style track, with a real 80s feel to it, Human League meets Beautiful South. Sweetness even introduces a little glam to the proceedings, ensuring that once again you just never quite know what's coming next.

This is an album with a lot of highlights. Home Sweet Home may seem a tad understated compared to some of the songs around it, but it's beautiful and wonderfully mellow. The title track takes the electro pop 80s vibe, infuses it with a euro flavour, and adds in the kind of vocals you'd get from a Lilly Allen or a Kate Nash. Pattaya has more than a little disco to it, reminiscent of Sophie Ellis Bexter in the vocals.

If the one possible criticism of Tarred & Feathered is that it stuck a little close to their roots as a Beautiful South tribute act, It's Complicated is a definite step beyond that, while still keeping everything that you loved most about the last release. This is a duo taking a big step into establishing their own sound, and it's absolutely fascinating to be joining them on that journey. This is certainly a duo to keep an eye on.