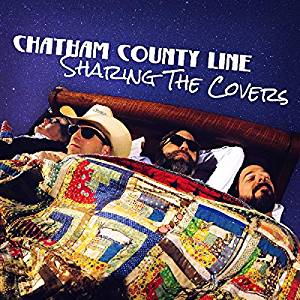 Chatham County Line
Album: Sharing The Covers
Label: Yep Roc
Tracks: 13
Website: http://www.chathamcountyline.com
Chatham County Line have always been clear that their own music is rooted in bluegrass but that they have many other influences. Often, they have included covers in their live set to give the audience a clue to where they're coming from with their own music. So, it's a natural move to record an album covering songs from those other areas that have shaped their career. That recording is in amongst us now and, with tongue firmly in cheek, called 'Sharing The Covers'.

The laughing, raucous counting in of the first track highlights the fun that they've had with this record. Taking Wilco's 'I Got You (At The End Of The Century)', they get the record off to the kind of vibrant bluegrass start that their fans love. Whilst the hard, metallic guitar from Wilco's original has disappeared, it's replaced by the acoustic drive of their fiddle, mandolin, banjo, guitar and bass. Perhaps, more of a surprise, is their slower take on Beck's 'Think I'm In Love' which has a somewhat dreamlike quality compared to the original version. So, as you can sense, the arrangements are key to the success of this record if they aren't going to pale in comparison to the original recording.

With this in mind, it's taking a chance to cover such loved songs as The Rolling Stones' 'The Last Time' but, in truth, the bouncing rhythm is a gift to a band adept in building up a bluegrass feel with their strong musicianship and harmonies. Turning to John Lennon's 'Watching The Wheels' from his 'Double Fantasy' album is a less obvious song choice from his catalogue of material but, again, it's perfect for conversion into a lilting bluegrass ballad. Taking a less well known song from a great songwriter also works a treat when some harmonica introduces their banjo driven treatment of Tom Petty's 'You Don't Know How It Feels' from his 'Wallflowers' record.

Their selection of source material isn't all from more contemporary writers. Carter Stanley's 'Think Of What You've Done' gets despatched at a blistering pace with John Teer's fiddle and Chandler Holt's banjo both in need of a post-recording cooling off period. Taken at a much slower pace is 'My Baby's Gone' written by Hazel Houser and made famous by The Louvin Brothers where the sweetness of the song is given room to breathe in displaying their love of harmonising siblings.

It's true that great songs are just that and can translate successfully into any genre as long as you have the arranging talent, love of the music and treat them right. Chatham County Line prove this with 'Sharing The Covers' which delivers a neat compilation of favourite songs and helps to give their followers some sense of the sources of their inspiration down the years.

I Think I'm In Love