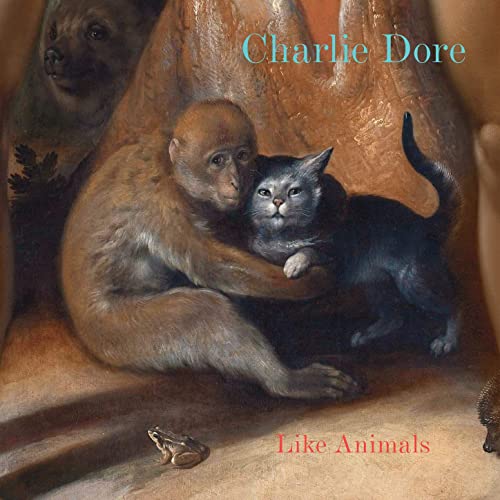 
The current lock-down situation has seen the proliferation, on social media, of round-robins asking for 'Best 10 this', 'Favourite 20 that', 'Given the impending Armageddon, if you could only listen to 5 albums ...' and so on. Of one thing I am clear, should fire, flood or a plague of locusts ever descend on this household then Charlie Dore would be one of the first artists whose music I grabbed on the way out, a collection that would now number 10 albums, given the release of this, her latest, 'Like Animals'.

The nine exquisitely crafted tracks presented in this new collection represent a shift away from her previous, award winning, 2017 'Dark Matter' CD with its wide-ranging scientific and space metaphors referencing particle physics, neutrinos and aspects of the metaphysical world, although the eagle-eared will also pick up on threads and concepts which have a commonality between not only both of these albums but also the wider canon of her illustrious work.

The core theme, (I was tempted to say nucleus), of 'Like Animals' is an exploration of aspects of the human brain and what makes us tick. Inspiration for this came following Charlie having been riveted reading about the limbic system, a group of interconnected structures located deep within the brain, specifically the Amygdala, which is responsible for the perception of emotions such as anger, fear, sadness and the controlling of aggression, together with its playing an important role in shaping decisions and even our memory.

Heady stuff, one might imagine. However, with her customary consummate prowess, the exploration of some of these basic instincts, and how we're often hi-jacked by our emotional responses, is adroitly transmuted into songs of great intelligence, interest and elegance. In what is another master-class in song-writing skill, negative emotions such as aggression, anxiety, fear and sadness all feature, but there is a balance too, in a nod to the work of the Precuneus and Hypothalamus, as positives, such as happiness, intense joy and love are found a place too.

The album's title is given further clarity, as Charlie says "You don't need a degree in psychology to notice that however sophisticated we imagine we are, we haven't evolved all that much. We're still animals, it's just that we wear suits and we know how to make gunpowder". The CD cover art, detail from 'The Fall Of Man' by Cornelis Cornelisz van Haarlem, if one agrees with scholarly interpretation of the inherent symbolic didacticism, reinforces this point further.

Recorded with her long time co-producer-writer and friend, the multi-instrumentalist Julian Littman of Steeleye Span, with whom seven of the songs on this collection are co-written, Charlie is also accompanied by regular compadre Gareth Huw Davies on double bass, fretless bass and cello player, highly celebrated violinist Jessie May Smart and leading UK trumpeter Quentin Collins, (who provides flugelhorn too). Founding member of The Magic Numbers, Michele Stodart is also featured, together with cameo appearances from Jackie Oates, who contributes viola to one track, and spoken voices from Chris While, Julie Matthews, Kevin Sargant, Michele Stodart, Tom Climpson, Janet Grace and Isobel Grace.

Opening track, 'Collateral' was obviously written prior to the pandemic situation in which we find ourselves at the time this is being written, and is non-specific in its target(s), but there can rarely have been a more prescient, powerful and relevant indictment of, as Charlie explains, "the power-hungry, anyone and anything who gets in their way is seen as collateral".

It wouldn't take too much thought to identify potential candidates who, in the current climate, would be condemned by many as fitting the bill, as expressed by such acerbic lyrics as
"And when the climate is of fear it's fun
to be the puppeteer
behind the curtain
Just pulling the strings...
...And when the herd is slow and think
It's fun to be a maverick"

This stunningly poignant track has to be deserving of widespread dissemination and airplay, and will surely be regarded as a classic.

A song inspired by a panic attack brought on by driving over the Golden Gate Bridge, which resulted in an inability to face driving on motorways for nearly 20 years, 'Rivers of Cortisol' broaches her coping strategies employed to combat the adrenaline-cortisol rush, including singing, referencing the fact that in addition to initiating the fight-or-flight response, the amygdala also plays a role in fear learning.

The introspective 'Animal Brain' has a gentle, lilting melody, ukuleles to the fore, but with perfectly judged violin and double bass, a track predicated on a conversation between the Charlie and her subconscious, the Animal Brain. Whilst many songs about infidelity focus on aspects of anger and revenge, think 'Hey Joe', with 'Ray and Lisa, Lisa and Joe', Charlie merely sets out a narrative, in her own inimitable way, in which Lisa, who lives with Ray, begins her nights with Joe, whilst the former is asleep. No judgements are made on her behaviour, and whilst there is a hint that Ray "knows something is wrong", perhaps "The same old rolling news again" line can be interpreted as a metaphor for her life with him and a reason for her seeking time with another man "Joe, you make me live, Make me forget..."

Mendacity is also the subject of 'Terrible Lie?', the albums' sixth track, (the question mark present in the title, at least in the album notes, to me, suggesting the song-writer is thinking 'rhetorical'). A beguiling song, musically enhanced by the addition of wonderful viola and flugelhorn, the story told here is one of a child asking questions about an increasingly frightening world,
"Why do the soldiers look so fierce
And why do they point their guns?"
In response, his mother lies to protect him "Because, little one they're only pretending", before conjecturing if he'll do the same for her when she's old and vulnerable.

The prospect of a song co-written and sung by Charlie Dore and Michele Stodart is a mouth-watering one, and 'A Hundred Miles of Nothing', the product of this collaboration, does not disappoint, in reality it actually exceeds expectations. Described as "A small hymn to silence, space and slowing down...", it does indeed invoke a heavenly, paradisiacal atmosphere, however, (so often there seems to be a 'however' in her work), there is, in my interpretation, still a nagging doubt that even given the opportunities afforded by the time and space suggested, the writer may still not be finding peace of mind or happiness.

'Sleep Like A Starfish' is a track which endorses what a fine voice Charlie possesses, whilst 'Leaf Blowing' is a delightful piece alluding to the regeneration aspect of both birds and leaves, and it is probably the first song to ever feature a Bb leaf blower.

The unadorned opening piano and brass which introduces the spoken list of names on the final track of the album 'Ordinary Names' sets the tone for this wistful paean to names that have dropped out of fashion. How perceptive, also, of Charlie to realise that for us of an ignoble vintage, it is certainly the case of having an Auntie Joan, Auntie Margaret, Uncle Frank or Uncle Arthur, and thus it is easy for the names to conjure up pictures of elderly relatives. One nagging thought on the names listed remains however; is it really a coincidence that we are given "...Margaret, Hilda ..." in the opening line?

'Like Animals', is a pristinely tailored album, once again evincing Charlie's singular dark wit, unique lyricism, and distinctive melodic voice, and it re-affirms her place as one of our most intelligent and erudite singer-songwriters.

The release date is 19th June 2020 and pre-orders (with a free one-track download for early birds) are now possible via Charlie's website.