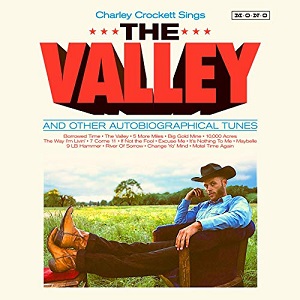 
At six albums into his career, Charlie Crockett has certainly packed a lot of living in. His take on Americana Roots synthesises a mix of Texan blues, Cajun soul and classic country borne out of his early days busking in New Orleans, to now playing upwards of 200 shows a year all over the USA, UK and Europe.

We are told, “Charley Crockett’s been running nearly his entire life, but with the title tracks to his sixth album, the Texas songwriter looks back at where he came from. ‘The Valley’ chronicles his hard upbringing on the south Texas border, bur also distils the essence of Crockett’s fierce and restless independence”

In a further twist, the album was recorded just a week before he had life-saving open heart surgery, which I imagine added a certain sense of urgency to the proceedings!

Of the fifteen songs on ‘The Valley’, eleven are Charley Crockett originals or co-writes with a smattering of classic covers, ‘7 Come 11’ written by Vincent Neil Emerson, ‘Excuse Me’ from Buck Owens and Harlan Howard and ‘It’s Nothing To Me’ by Pat Patterson, plus one Trad Arr, ‘9 LB Hammer’.

Opening track ‘Borrowed Time’ barges in with Crockett’s great vocal telling us to ‘Tell the truth and shame the devil’, a voice that sits somewhere between the honey tones of Charley Pride and the more direct urgency of Sturgill Simpson. The song itself is hooky and percussive and if it isn’t already, is destined to become a live favourite.

‘The Valley’ is more straightforwardly country with its heavily reverbed guitar, pedal steel and narrative lyrics while ‘5 More Miles’ is back to the percussive drive of ‘Borrowed Time’ as Crockett sings as though he is genuinely running out of time, rattling through like Richie Havens covering Johnny Cash; great song.

And so it goes throughout the whole album, as the high bar set in the records opening salvo of songs is maintained with ease.

Other stand out tracks for me are the almost Stax Soul stylings of ‘If Not The Fool’, the sparse banjo, percussion and vocal take on the Traditional ‘9 LB Hammer’ and the glorious, straight forward country resignation of road song ‘Motel Time Again’.

I reviewed the latest album from the legendary Delbert McClinton recently and Charley Crockett has the same ability to straddle genres and styles in a completely seamless, natural way. What binds all the songs together on ‘The Valley’ is Crockett’s trademark voice, the rich playing from the band and a core emphasis on the rhythm side of things which gives everything here a real presence.

At 15 songs there’s a lot to get stuck into, and I can heartily recommend doing so.