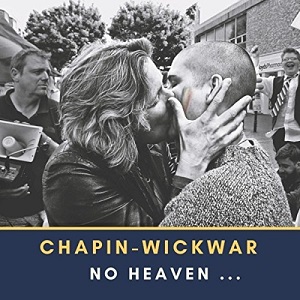 
"No Heaven..." is the second album from Lisa and Sue Chapin-Wickwar, following on from "If..." in 2015. It's interesting to note, and perhaps not coincidental, that both have an ellipsis in the title, suggesting that words have been omitted or left unsaid. If your only experience of this Northumberland based duo is their recorded work then you will occasionally need to read between the lines to understand the full meaning of the songs you're hearing, which are largely autobiographical. If you get the chance to see them perform live, as I did at the London launch at Twickfolk on the 8th June, then you will get more of the background. Both Lisa and Sue have stories to tell which are way outside the comfort zone most of us sit in during our lives and that can make listening to their work a challenging, but ultimately rewarding and uplifting, experience.

The opening track, "I Am Ready", is both an introduction to the album and an affirmation that the past is a different country. The trials of life have created two strong individuals who have found each other and happiness and can go forward with their heads held high.

'I'm ready for my story to be told, I'm ready to tell my tales of old ,
And there'll be those of you who think it's best I lay my secrets down to rest,
But I'm ready, I'm ready.'

All of the songs are self-penned, the majority come from Lisa and these tend to be darker in nature, with the words being accompanied by a fairly simple backing tune that give the songs a starkness that can verge on bleak. "Black and Blue" is a story of domestic violence, where the victim is unable to leave her abuser. A beautiful voice and dancing could not save her and eventually she settled on the life she had as the best she could hope for.

Sue's songs are equally as shocking, in many ways, although with a different beat, which can almost have a bosa nova feel to them. "Afraid of Love" is about "the love that dare not speak its name" accompanied by a tale of bigotry that is breathtaking in its intolerance whilst set in living memory. Despite that it still manages to be a beautiful love song.

As I said this is a challenging album to listen to but it is also a album of wonderfully written and performed music and that makes it worthy of a place in any collection of modern folk music. It is folk music, too, in its most pure form; stories of everyday people dealing with the slings and arrows of life. What also makes it superb listening is the undeniable fact that Chapin-Wickwar have some of the best harmonies you will ever hear. There are, of course, many good duos around but very few can achieve the balance in both in their singing and playing that ChapinWickwar have. Either can take the lead in vocals or guitar and the voices and music interweave whilst still complimenting each other. They have a remarkable affect on an audience, too, who don't just listen but hang on to every word and note.

"If..." received great critical acclaim when it was launched. "No Heaven...." deserves as many plaudits, if not more. It more than matches its predecessor and establishes Chapin-Wickwar as a pair of sensitive and passionate storytellers who show that the the human spirit can triumph over adversity and still remain beautiful.

The album is available now from the artist's website and streaming platforms including CD Baby and Amazon.