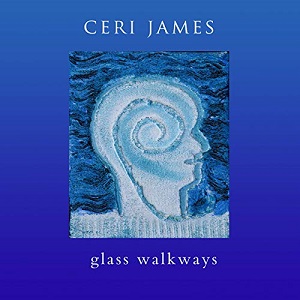 
Welsh Troubadour Ceri James is back with album number 6, melding together indie with blues to great effect. The former Zen bassist has had a busy time of it, racking up an impressive number of live shows over the last few years. He's come a fair way since his days of licenced busking on the London Underground in the mid-2000s, though his releases keep that raw energy you get from the kind of live performance aimed at capturing attention.

There's a rich vein of joy that fills the album; the pleasure James clearly gets from performing really shines through. He's also not averse to injecting a little levity into proceedings, with songs like Middle Of The Road Blues featuring a self-deprecatory and sardonic humour. That's not to say that he has nothing to say. One of the highlights of the album comes early on with The Sea Of Hate, a thinly veiled dissection of the current state of British politics.

There's a fascinating mixture of influences going on throughout the record. Blues is front and centre, and certainly James has a great bluesy vocal style, but there's a lot more going on here. Oh Your Careless Heart has a real country feel to it, while Angry Soul has elements of punk and some classic British pop within it. She's So Demanding marries together Brit-pop indie cool with some seventies era gritty vibes.

Pick of the tracks though is probably Without Our Love, with James' vocals featuring just a touch of a Jagger like inflection to it, and a beautiful violin accompaniment.

Glass Walkways feels wonderfully raw for the most part, as all good blues albums should be. There is plenty of heart and soul on display, and the indie sensibilities make this very accessible. If you like your music to demonstrate a little depth but to still be a fun and energetic listen, this is well worth checking out.

The Sea Of Hate