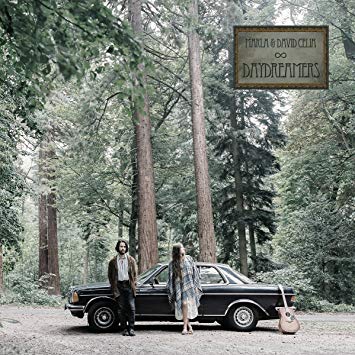 David and Marla toured extensively together and became a duo. "Daydreamers" is their first album as a duo , with eleven co-written songs which were finalized whilst touring Russia on the Trans-Siberian Railway. The "bed tracks" were recorded by Ron Sexsmith's drummer Don Kerr at his studio in Toronto , with the overdubs added at David's home studio, Organica.

Actually, "Organica" is a very apt description of this album ,which exudes warmth and honesty throughout. The music is bright and colourful ,with a great sense of melody, not to mention some lovely harmony vocals from this couple whose deep affection for each other is abundantly clear.

Several of the songs are straightforward love songs ,about being in love ["Lover Of Mine"; "Heart Like A Dove" and " I Am Her Man"].

Others deal with the situation of being separated by geography , notably the Latin-tinged "Where Are You", with its lovely slide guitar from David and wispy backing vocals from Marla. On a similar theme is "Warming Words" about lovers counting the days until they see each other again.

One my favourite tracks is "Follow Me", with its delicate melody and glorious harmonies, which to me ,are reminiscent of Gillian Welch and David Rawlings.

I don't want to give the impression that the album is only made up of love songs. Other , more general , subjects are considered. In the opening song "Carry It On", David and Marla , inspired by Pete Seeger's songbook of the same title, write about being true to yourself - "If you have a will, carry it on". The song is deliciously dreamy folk-rock with bluegrass-style harmony vocals.

On "Luddite Blues", Marla and David look back at past times when people used to meet ,rather than hiding inside "tickin' on a screen un-naturally".

"Brave New World" deals with the subject of Boat People , who "Travelled in droves to the sea, Leaving their possessions behind". The song has a positive ending as the refugees realize that "The children in their hearts would live on". The serious nature of this song is contrasted by the music , which has an Everly Brothers-meets-The Beach Boys feel to it.

In summary, this is a beautifully crafted, intimate and warm album which is a joy to listen to. It is clear that a great deal of love and care went into its making.