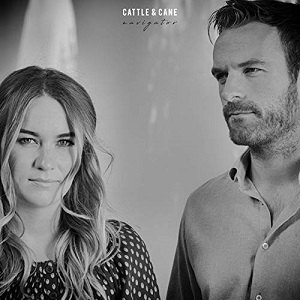 
With radio play on shows hosted by the likes of Elton John, Tom Robinson, and Frank Skinner behind them, not to mention millions of Spotify streams and songs featured on a plethora of reality TV shows, Cattle & Cane are as close to hitting the big time as anyone. It's not every band that can boast that their lyrics have appeared on football kits after all, yet last season Middlesbrough ran out onto the pitch with Cattle & Cane's Infant Hercules on their shirts. Yet if sibling duo Joe and Helen Hammill haven't quite fully broken through with their band, Navigator could well be the album that helps them do it.

It always helps when you have an opener that really grabs the attention, and Neighbourhood does that and more. With it's stripped back start leading into a pounding chorus that lodges in your brain, this is a pop record of very high standards. The first single from the album is unsurprisingly one of the strongest tracks on the album. Mexico is an upbeat ear worm with a driving beat, and it's one of the better pop anthems of recent times.

There is plenty of depth to the album. Hurts Like Real Love would have been huge in the very early noughties, up there with the best that bands like Stereophonics and Travis would have produced. Waiting To Become has a fantastic folky feel to it, while I Am Yours is an achingly gorgeous ode to Teeside which has a touch of gospel to it. The final two tracks end things on a more simplistic note, with pared back arrangements allowing the vocals to really shine out, which makes both Hello Love and Lion or The Lamb beautiful to listen to.

It's no wonder that Cattle & Cane are drawing in new fans all the time, and Navigator sets them out as a band who are really going places. Perfectly accessible and an easy but wonderful listen, the album is also full of hidden depths. It's these depths that will keep you coming back again and again, resulting in an album you'll still be listening in years to come. By which time I strongly suspect that will be few people who left who haven't heard of Cattle & Cane.