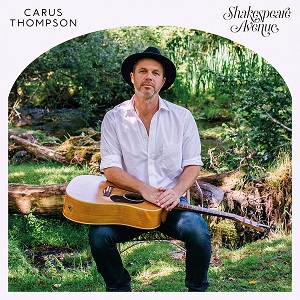 
Carus Thompson is an Australian folk songwriter and storyteller. SHAKESPEARE AVENUE, his seventh album, is named for the tree lined street in Bath where his late grandfather lived before leaving for Australia. Carus, doing the trip the other way, recorded the album in Dartmoor with Mercury nominated producer Sean Lakeman. Its a partnership that works very well, with Seth, Lakeman, who Carus has toured with, playing violin, Sean playing guitar, multiple keyboards and bass and Kathryn Roberts adding superb vocals.

Carus and Sean's rich playing make this a guitar album, tracks like "End Of The Day" are built around two instruments chiming and playing around each other. There is a real 'Bert and John' beauty just in that. Carus is also a fine vocalist, folk and a little Americana world weariness together make him very listenable. Sean Lakeman's superb production gives a little sparkle to proceedings, so on "End Of The Day" and other tracks the vocals are layered and there are touches of electric lead. "Avondale Heights To Sunshine" is a mixture of darkness and light. The lyric describes an ignored wrong side of the tracks beginning, an electric guitar burns and Carus sings with passion. The sense of disquiet and simmering rage continues through "Shoulder" and "Yagan", with Carus perfectly balancing beauty and fire in his writing and delivery. "Yagan", an historic narrative about an Australian Indigenous leader, features vocal accompaniment by Kathryn Roberts raising the heat in Carus' angry look back. "Shakespeare Avenue" is a beautifully observed and delivered tale of Carus' late grandfather leaving Bath forever to settle in Australia. The lyric is a perfect mix of small details and big emotions, carried on a delightfully sparkling guitar. "Dylan Voller" is an Aboriginal-Australian whose treatment while in detention triggered a Royal Commission into the Northern Territories Child Protection and Detention Services. To Carus' credit he deals with the subject sensitively, balancing the serious issues with a folk blues bounce on his guitar and a reflective vocal. "Lands End" is a beautiful performance, using the end point of land as a launching point for some potent soul searching rreflection. Like the previous track this is sensitively delivered, with other instruments adding to the atmosphere perfectly. "You See It Through" is a perfect folk blues, a cracked emotional vocal, rythmn foot and minimal backing make everything glow.

Wonderful folk songs, full of real-life detail and emotion, sympathetically recorded and produced. Surrounded and framed by other musicians but never smothered, Carus' fine voice and songs shine. The cover, with its Pre-Raphaelite painting like front shot of Carus and guitar in the Dartmoor landscape and the back shot of him mid song under a tree captures it all perfectly. It's not just a photoshoot, it's a man connected to and at peace within the world, channelling it all through his writing and playing. It does what it says on the tin, or in this case sleeve.