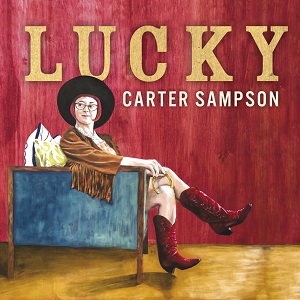 
Out of Oklahoma, Carter Sampson ploughs a familiar furrow but what she plants comes from the finest country stock, the guitar driven rocky title track opener a reminder of her good fortune at making a living doing what she loves, slipping into a softer, picked groove for ‘Anything Else To Do’, the tempo and instrumentation gathering as the songs rolls along into the scuffling rhythms of the southern raising of ‘Peaches’.

All bar three numbers are penned by Sampson, imprinting her distinctive gutsy bluesy soul on ‘Ten Penny Nail’, apparently inspired by Guy and Susanna Clark’s volatile relationship while the determination-themed, be a better man ‘All I Got’ reins it back in, Wild Ride journeys down a well worn but comfortable jogging country path and, a long established live favourite, featuring Jared Tyler on dobro, ‘Rattlesnake Kate’ spotlights her narrative storytelling skills as she spins the tale of a feisty character who skinned the rattkesnakes she’d killed to make “a matching dress and shoes” and “raised goats to cover up the smell/of the air coming off that moonshine still.”

Zac Copeland provides two of the non-originals, first up being the dreamy, pedal steel slow walzter ‘Hello Darlin’’ and the other, ‘Tulsa’, an equally unhurried but moodier number that uses the rivalry between Oklahoma City and Tulsa as a stepping stone metaphor for identity and betrayal that’s sports the wry line “said he’s leaving me for Nashville, said ‘hey, have fun standing in line’.”

The album ends with the third cover, a reading of Shel Silverstein’s ‘Queen of the Silver Dollar’, which, taken at a slow and steady pace and minus the distinctive drum beat intro doesn’t measure up to the versions by Emmylou Harris or the seminal Dr Hook & The Medicine Show original but, complemented by weeping pedal steel, does evince its more melancholic aspects.

I’m not persuaded that this is a stronger album than 2016’s Wilder Side, but it certainly won’t do her ever-ascending career any harm.