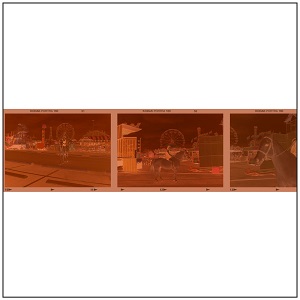 
Hailing from Austin, McHone draws on traditional country and honky tonk roots and filters them through a contemporary alt-country context. Indeed, five of the songs are actually re-restylings from her previous, album, 2016's Goodluck Man, where they had a far more old school setting.

She starts, however, with a brace of new numbers, first up being 'Sad', the slow waltztime, pedal steel-led intro, giving way to a jauntier fiddle and electric guitar driven tempo as she sings about a relationship that isn't all it could be. It's followed by the rumbling drums and distorted reverb guitar opening to 'Drugs', a song about love addiction, that conjures a sort of Dean Wareham shoegaze meets Willie Nelson country vibe.

The first rework comes with 'Lucky', shortened from the original 'Ain't You Lucky (I Love Being Lonely)', but still with its tempo trampolining, starting out as a fiddle-led jaunt before suddenly switching back and forth between that and a slow sad sway and then back again. Following the same track sequencing, 'Good Time Daddy Blues' retains the 2016 version's Johnny Cash rockabilly chug but slows it down slightly and is, in turn, followed by 'Dram Shop Girl', an autobiographical look at how teenage years playing the barrooms have shaped her world view. It's a very different reading, the original being a simple reverb guitar and voice ballad while this time round there's more instrumentation, a slightly livelier tempo and a very different style of guitar solo, although the vocal delivery is still semi-spoken.

A 67-second warm up precedes 'Gentle' (formerly 'Gentle With My Mind'), which, while keeping the waltz tempo, transforms from a piano-backed Loretta-like honky tonk to a fiddle-led, pedal-steel keening song of love gone cold that focuses more on what was than the sadness that remains.

There's three further reworks. Appearing later in the running order here, 'Maybe They're Just Really Good Friends' loses the opening drum while adding fiddle and boosting the steel, but otherwise retains its twangsome Western swing flavours. By contrast, 'How 'Bout It' shapeshifts from voice and acoustic guitar to melancholic closing time torch piano ballad, adding almost a minute and a half to the running time, cranking up its emotional power in the process.

'Goodluck Man' closed the previous album and is reprised here as the penultimate track, given a slightly fuller arrangement, but still stripped to the emotional nerves, while this time round things close with the all-new 'Spider Song', droning harmonium backdropping the acoustic guitar on a terrific number that comes over as the love child of Emmylou and Townes. A stand-out album, this isn't about reinventing her past, it's about illuminating her future.