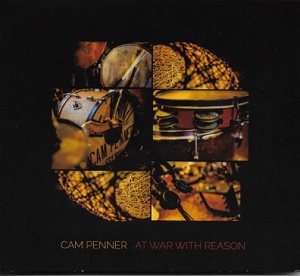 
The opening track on this intriguing collection urges us to Gather Round and Cam Penner is one of those genuine and gentle guys you simply don't want to refuse.

Sitting together, staving off the cold and warming to the music sounds perfect to me. As Penner eloquently points out, the ten songs gathered up on At War With Reason were "born from the winter, from the darkness" while adding: "….there is a light in everyone of them. A hope. The search for the better."

Released as the warmth of the summer is long forgotten and we step into the bleak months, it is striking that there is no frostiness in this ten-track offering. Instead, we find deep melodies in a flow of unhurried tracks, unfurled carefully to help us huddle in to the songs, many underpinned by a dogged kick drum, and developed by loops and backing tracks delivered in cahoots with the urbane Jon Wood.

In a sense, the vocals on most of the tracks are delivered in a spoken word style that almost veers into a gentle form just shy of hip-hop. But Penner manages this deftly without being strident, so the tracks still feel earthy and hypnotic, throughout, creating a call of the wild feel, as I know I have noted before.

Here, Penner picks up where his adventurous, Sex And Politics release from 2016 left us. He continues boldly once again in these songs, which are a far cry from the country/rock tones of Felt Like A Sunday Night or Trouble And Mercy that came out in the first decade of this century.

But Penner should take a bow for this step change. He is not scared to divert musically from his dusty road, bar-room roots - and that is something to admire. For one thing it shows a range of real talent and extra energy untapped or not always evident when artists stick to what they are familiar with in recording terms.

From the soothing tones of opener, Gather Round, the hard-to-ignore melody that seeps out in the fetching, Poor You, and the far-from-radio-friendly but insistent and terrific, Lights On (High School Musical), inspired by school shooting tragedies, the musical daredevil in Penner is constant. His lightness of touch in some vocal passages is simply glorious amidst the diligent gizmos carrying out their studio jobs.

Album highlight, Over And Over is wonderful and deserves to be cherished - strummed acoustic guitar, ghostly harmonies plus a melody that yields at one stage to the lightest shades of electric guitar. Wish it lasted longer than two minutes and forty-four seconds as it is so captivating.

No Angels No Devils is the gripping, final track, surely placed here to make us wonder and puzzle over what this highly original, inventive and sensitive singer/songwriter, who works in a shelter for the homeless during the day and makes music at night, will come up with next.