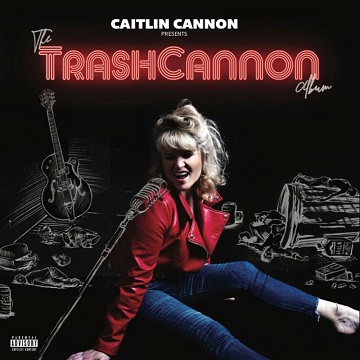 
"I'm repurposing the inner trash" is how the Alabama-born singer-songwriter describes her new collection of punchy countrypolitan Americana. Certainly it litterally rummages through life's garbage, both personal and social, in the way women are seen and treated by men. And recycles it with a sly sense of wit.

She kicks off with the country dancefloor chugging and pedal steel streaked' Going For The Bronze', the story of a girl who, after all her hard work in school, winds up pouring coffee in a diner, just like a friend with a Masters degree who's working as a waitress, a commentary on the all too familiar story of how even the best graduates can end up struggling to find commensurate work, as she puts it while "a pretty good GPA will get you into state" in the end a "BA is just BS".

Max Hart racing along the piano keys in Jerry Lee style, 'Toolbag' is a fun rock n rolling feminist refusal to be just some man's sexual screwdriver before the first personal note arrives with 'Drink Enough', a catchy uptempo song about her capacity to sink a few written before she quit the booze, a number that's neatly complemented by the slow waltzing 'Deliver', the first she wrote after getting sober ("the corner bar, the liquor store they are not on the way home anymore…from now on it's just coffee"). Sandwiched in-between is the bluesy midtempo rocker 'Mama's A Hairdresser', a number about her mother cuts enough hair to get money for plane tickets to visit her brother in a maximum-security state prison in Alabama, something she's done for 29 years since he was 17.

Haircuts and getting half cut come together on the slow march rhythm 'Barbers and Bartenders', opening unaccompanied before the pedal steel sets in on a song about those who serve as confessional booths without having to visit a church or a therapist. And if that calls to mind influences such as Loretta Lynn, the brief handclap and percussion 'My Man' tips the hat to Shirley Ellis.

Returning to the theme of the opening track, 'Better Job' gets behind the bar again as the narrator wishes she could improve her employment prospects, talks of the sort of people she has to deal with and wryly observes how shorter shorts earn bigger tips. That notion of how women can work men's perceptions to their advantage is something that also carries over into 'Dumb Blonde' which, given a gypsy jazz treatment complete with Django Reinhardt-like guitars, a nod to such idols as Dolly Parton who realised that "playing dumb's the smartest thing a blonde can do".

And from gypsy jazz to a vaguely light samba rhythm with a brush of rockabilly and doo wop, 'Pin Cushion' (a call for mistreated women to not just suffer in silence) reminds me slightly of Kirsty MacColl by way of Kitty Wells, and then it's back to personal territory with the swaying country of 'Daddy-O Mine', a number that draws on her complex relationship with her estranged biological father and how it's impacted her own life choices.

The album ends on a musically low key note pun with 'Cannonball', simple fingerpicked steel-keening confession of the strength and nature of her love, strikingly described as being like "a widow waiting in the window". Definitely not a waste of time.