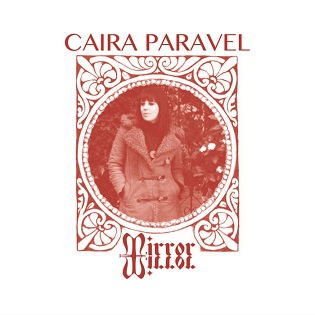 
Caira Paravel is a psych-folk singer, writer and painter based in San Francisco. She possesses an unaffected, honest voice that might best be compared to that of Vashti Bunyan but with occasional shades of Judy Dyble. She doesn't write her own songs, but two of the songs on this, her debut album were written by its producer, God's Eye label owner Walker Phillips. He also provided the vast majority of Caira's musical backing, which includes acoustic guitars, bass, harpsichord, mellotron, organ, flute, sitar, bells and moog synthesiser - thus imparting a suitably retro sound to the proceedings (and all recorded straight to analog for added authenticity).

The above probably appears to promise more than one's first playthrough might reveal - but I'd urge you to stick with it, for the rewards are great. In which respect, it's all much in the manner of minor-league late-60s/early-70s home-produced artefacts; the album is stylistically something of a ragbag patchwork, covering many bases as it draws unashamedly on psych-folk, pop, pseudo-medieval, choral-gospel and even early electronica over the course of its half-hour's duration. Its unity of expression derives more from its dominant atmosphere, a kind of melancholy sweetness that's hard to define or approximate but is undeniably attractive (although sometimes bordering on cloying).

Unfortunately, no writer credits are supplied with the package or website tracklist, but I can tell you that three of the album's most memorable tracks are covers. Arthur Lee's enigmatic romance Andmoreagain (from Forever Changes) receives a gently sweeping, swooning treatment with gorgeous, dreamy vocal harmonies aplenty. Although nominally propelled by guitar and bass, Lal Waterson's Fine Horseman is further couched in swathes of mellotron which enhance the song's doomy, other-worldly aura. And leaving the most enterprising till last, I Know You, a rare composition by the ISB's Licorice McKechnie, is blessed with a full and satisfying arrangement (more like the ISB than the ISB!) which is far removed from the fragile, hesitant, highly vulnerable Likky original (on the U soundtrack); that final track is a real triumph of insightful interpretation in my book.

Elsewhere, Walker contributes some appealingly ethereal vocal harmonies to his own composition Mirror, Mirror, while his second writing contribution, a depiction of Love Bird, is shiveringly accompanied by some eerie scraping and bowing. Lord Of The Reedy River is a fluttering dialogue between voice and flute, and The Magic Wood is a vocally stereoscopic sitar-soaked fantasy. Odder still is the jaunty circus-style Pink Sugar Elephants, rather like bubblegum purchased in a child's toyshop.

This pleasing, if slightly oddball album is definitely worth seeking out, as is the other product of the God's Eye label that I've sampled so far, Walker Phillips' own album (review to follow in due course).