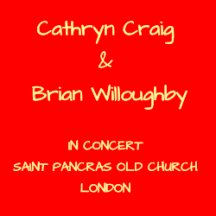 Having got the apologies out the way, can I just say "About time." Brian and Cathryn have been together for nineteen years now, and have just got married. Apart from my wife and I, I don't think I know two people who are more destined to be together. Why it has taken them so long I can't imagine. I'm sure I speak on behalf of everyone at Fatea when I say "Congratulations, you guys. We hope you will be really happy."

Whilst I'm on the subject of "About time", can I add that it is also high time that they released a live album. After so many years of writing and playing together I can't believe that it has taken them this long. Not that their studio albums aren't beautiful, (in fact "Calling All Angels" must be one of my favourite albums of all time), but, in my opinion, live music is so much better than a studio recording. In addition, Brian and Cathryn are one of the best live acts around, so this album gives those that aren't as lucky as me and who haven't yet seen them perform, to discover how good they are live.

Brian is not only one of the best guitarists around, he is also one of the most versatile. I have see him play prog, heavy metal, folk, pop rock and blues, and in every case, he surpasses himself. His secret is improvisation. Every time you hear him play, he will do something subtly different. Cathryn excels as a vocalist. She has a wonderful range and enormous confidence and her introductions to the songs are always entertaining and moving.

The only trouble with waiting nearly two decades before you release a live album is that there is a great deal of beautiful songs that they have written that didn't get included, most notably "Acanoe", "Goodbye Old Friend" and "Hard Luck Cafe". "Acanoe" is such a beautiful and exciting song it seems hard to imagine the two of them not playing it. Still it is wonderful to hear that "Two Hearts" is back in their set list again. Thankfully the other song that it is synonymous with them, "Alice's Song", is still being played. I love "Alice's Song", not least because I've met Alice a couple of times and have even seen her standing up on a plinth, public speaking! Alice is Brian's niece, who suffers from Asperger's syndrome. The song was written when Cathryn was first introduced to Brian's family and Alice smiled at her. I had a quick look in the Guinness Book of Records to see if there was a record for a song being recorded the most number of times by the same artist, but couldn't find such an entry, but I suspect this could be a contender. When Brian was with the Strawbs, the song was released as a charity single and appeared on their album "Baroque and Roll" (and on the "Wath '04" bootleg, but that possibly doesn't count). Brian and Cathryn played it at the Strawbs 40th reunion, so it also appears on the Strawbs album "Strawberry Fayre". It appears on Brian's first solo album "Black and White" (accompanied by Cathryn - she claims she still hasn't been paid) and there is an instrumental version on Brian's solo album "Fingers Crossed". They then recorded different versions on their albums "Calling All Angels", "Real World", and "In America". And now a live version. I love them all.

One of the highlights of their last album, "In America" was a cover of "You've Lost That Lovin' Feelin'". They recorded it because Cathryn's first paid job was working with Bill Medley. Glad to see that they've added that to their set list. Cathyrn introduced the song by saying that if you don't know the song to be able to sing along then you are obviously too young and should go home.

They started, as always, with "That Ol' Guitar", a song written for Cathryn by Shel Silverstein (who wrote Johnny Cash's "A Boy Named Sue", and Marrianne Faithful's "The Ballad Of Lucy Jordan"). And finished, again as they usually do, with "My Window Faces South", from Cathryn's eponymous solo album. The majority of the remaining songs (apart from Brian's solo, "Fingers Crossed" and "This Night, These Dreams And You") are relatively new.

Highlights, at least for me, are "These Old Stone Walls" and "Spirit Is Stronger Than Truth". "These Old Stone Walls", (from their 2015 album "In America"), because Brian uses an E-Bow, which reminds me of his time with Strawbs, and "Spirit is Stronger Than Truth (from their 2013 album "Real World") because whilst they were playing the St Pancras Church bells rang and the sound blended in perfectly with the music.

The attached video, "Malahide Moon", comes from a TV appearance that Brian and Cathryn made in Holland.