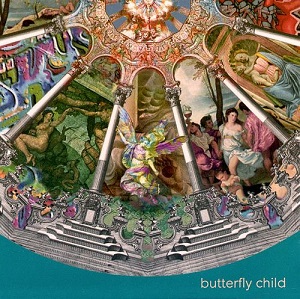 
1993 – the year of Nirvana’s In Utero, Blur’s Modern Life Is Rubbish, and Bjork’s Debut. With Britpop about to explode, and Grunge beginning to fade out, it was a rare time when an unusual release could find a little traction. Butterfly Child may not necessarily be a name you recognise from that era, but with the re-release of their debut full length album Onomatopoeia, it’s the perfect time to discover the album The Wire called “Pop album of the year” back in ’93.

Onomatopoeia is very much an album, rather than a collection of songs. While Ave is a strange opening, with its rumbling industrial introduction, it soon settles into something more melodic. Our Lady Mississipp has a lightness and warmth to it, and is followed up with the sprightly Lunar Eclipse. There are a couple of experimental tracks with X-Celcius and Verte Ecolé which may prove musical marmite to some. Highlight though is the wonderful Young Virgins Call For Mutiny, which sounds impressively modern for a song released the same year as Nirvana’s Heart Shaped Box.

Given that the album is 25 years old you’d expect it to sound somewhat aged, but it still has a remarkable fresh feel. There is certainly a timeless quality to it, with few touches that mark it as a product of its time. Full of sprawling melodies and understated lyrics, it’s the kind of album you drift away with, the musical equivalent of a dream. Onomatopoeia stood out from the crowd in 1993, and it still stands out today.