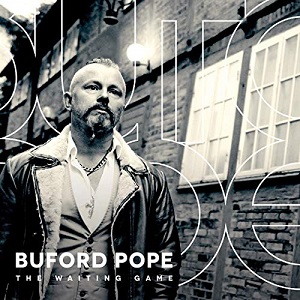 
For those who have yet to encounter him, while the name may suggest a good ol' boy who could have been a character on The Dukes of Hazzard, Pope is actually from Gotland in Sweden, his real name being Mikael Liljeborg. The music, however, is as authentic deep fried Southern country and blues as you could wish.

This is his eighth album, the follow-up to 2017's Blue Eyed Boy, and opens with the sole co-write (with Mark Drake), the moody, drums and piano underpinned 'America', a song about the increasing feelings of alienation among immigrants in the current climate of their adopted home.

He gets playful with the violin accompanied and Neil Young tinged 'Hey Hey Aha', basically a song about having difficulties writing a love song, mandolin lifting the tempo on 'Hard Life', a number which rightly observes that if you don't suffer the knocks how can you appreciate what life's really worth.

There's more vocal hints of Neil Young on the worldweary 'Stoned', a strings-backed piano ballad about a losing streak ("I lost another poker game and couldn't take the heat") and going back home with a line about how "they couldn't call it a loan" that is surely a Jackson Browne nod.

Adorned with fluttering treated piano notes and circling electric guitars, the salvation and redemption-themed 'Five Minutes To Midnight' is a particular standout with its shades of Southern country gospel, that sense of the need for an anchor and a hand to hold when you feel adrift seeping over into the pedal steel and strings-coloured slow country ache of 'Tell Me What I Am'.

"Hey kid don't forget you're from a small town" provides a key image on the banjo and dobro accompanied acoustic ballad 'First Blood' which looks to call time on pointless arguments and recriminations, self-examination and a need of atonement for "all the bad things I have done" informing the plangent mid-tempo steel-soaked alt country 'Wanna Say I'm Sorry Before I Die' and "leave like a spirit in the sky".

That sense of owning up to faults and failure ("I didn't see you when you cried") and seeking expiation, here for the neglect of a friend or lover, continues into the muted and spare 'Can I Be There For You' with its melancholic dobro and Pope's falsetto notes

Nostalgia and reflection on youthful days of restlessness and rebellion make 'In My Hometown' another highpoint, drawing on the soul of Springsteen without aping his sound. It's sandwiched in-between two versions of the same song and lyrics, but with different titles, about being the loser in a relationship to a former best friend and how "another man's drinking my red wine" and "stole the keys to my door." The first version, a handclap rhythm Dylanesque gospel blues with organ and slide guitar, is titled 'A Hundred', in which the protagonist "ain't even close to ninety-nine." The second is, in fact, 'Ninety-Nine', again with a drawled Dylan influence, but here arranged as an acoustic guitar and piano barroom blues. It's an audacious gambit and one Pope pulls off brilliantly. But then, anyone who's followed his career will know, that's something he's been doing for the past sixteen years.