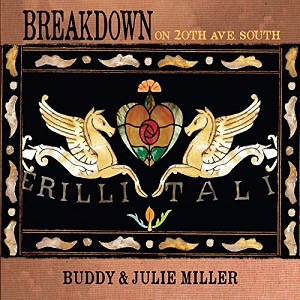 
It's been a whole decade since the last album from the celebrated husband-and-wife team - no wonder, for almost ever since the stunning Written In Chalk hit the racks in 2009 Buddy's been constantly in-demand for session and production work as well as a lengthy stint of touring with Robert Plant's Band Of Holy, whereas Julie has gone through a host of health and personal crises - and has written dozens of songs (though probably not in chalk!). One of the first of those, I'm Gonna Make You Love Me, was a direct message to Buddy that she was being neglected and that they needed to get round to making another record together in order to get back the unique, special creative musical bond they had been able to enjoy together before the rest of life took over. That song was recorded in the couple's bedroom upstairs from Buddy's home studio, and its quality of "emotional clarity and bare-boned punch" became a kind of benchmark-cum-template for the cutting of basic tracks on which to build the rest of this new album. Central to the sound of these recordings, we find, are the couple's trademark impeccably-matched harmonies and Buddy's easy musicianship - stylistic hallmarks like reverb-laden twang guitars and deft support lines.

The musical climate of the disc is not exactly strict country, more Americana maybe, so its fate may be to fall between the stools as far as appreciation goes - but it's a very satisfying production nevertheless, and one that's sure worth your cash investment. The record could be divided into on one hand the harder-edged, bluesy swagger of tracks like Underneath The Sky and the disc's title song, and on the other hand delicate acoustic-backed ballads. Both convince mightily though, principally due to Julie's wonderfully expressive and versatile singing and those to-die-for harmonies on almost every track somewhere (the jointly harmonised, almost Dylanesque commentary Thoughts At 2 A.M. is especially thrilling), but then Buddy's own lead vocal outing on Secret is pretty darned good too.

Julie's writing on all of the dozen tracks proves consistently strong. Admittedly, the trials and tribulations of personal circumstance, love and romance are her forte, but nevertheless the closing Storm Kisses is a touching number built around the title, words uttered by Julie's four-year-old nephew not long before his father was killed by a lightning strike. A comparably doomy Feast Of The Dead matches its surprisingly macabre demeanour to its context, but then War Child takes a different thematic departure and becomes a standout track, set to a fierce pounding tattoo of tragedy.

It's so good to welcome Buddy and Julie back to the recording stage as a performing partnership, and I really hope it's not gonna be another ten years before their next album together - and judging by the fact that they had close on 50-60 new songs to choose from for this album, surely it can't be all that hard to let us hear some more of those, even in stripped-back form?