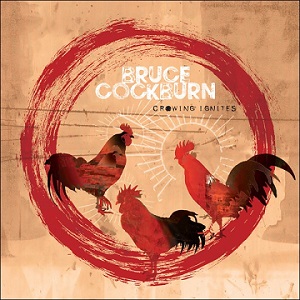 
With a strong pulsing rhythm and florishes and accents thrown in over the top, Bruce Cockburn is a master of the guitar. Other than SPEECHLESS an instrumental album released in 2005, Bruce has spent the last fifty years using his guitar to build atmospheric songs and tell stories, but this is no side project or between song filler, this is a well crafted album as descriptive and lyrical as anything he sings. "Bardo Rush" is an insistent opener with a fast strum and some very Bert Jansch nimble left hand work while a keyboard creates atmosphere. Bruce mentions his Scottish Clan roots in his notes and I think that Celtic Blues feel is clearly there in his playing. "Easter" is a superb solo guitar piece, with Cockburn using space and timing with sparse passages and great flurries of notes to create beauty.

This is a masterclass in how to create interest, excitement and drama with just one exquisitely recorded guitar. "April In Memphis" is more pensive and reflective, again with a masterful use of space to let every nuance breathe. Chimes ring like church bells in this supremely atmospheric piece written on Martin Luther King day 2019. "Blind Willie" for "Dark Was The Night" Blind Willie Johnson, layers in Colin Linden's slippery Dobro notes on a superb duet. Reflectively titled for a statue in a nearby Church "Seven Daggers" is a more unsettling listen, but maybe that because the disquieting Kalimba and Bells intro reminded me of Bruce's "You've Never Seen Everything", still one of the bleakest, most questioning fever dream songs I have heard by Cockburn or anyone else. The two guitars played by Bruce and Colin Linden dispel some of that disquiet with their uplifting and rich interplay. "The Mt Lefroy Waltz", originally recorded for the BONE ON BONE album and played on a custom made guitar is part Bill Frisell like electric guitar, with Bruce's notes along with Ron Miles' distinctive muted trumpet also creating a Miles Davis IN A SILENT WAY vibe.

It's a stunning pairing and further evidence of Cockburn's lifelong need to experiment. "Sweetness and Light" is perfectly placed after the two darker tracks to be a sparkling lift. "The Groan", an unused blues track from a soundtrack has a fine guitar pulse with massed clap percussion, like a guitarist's foot tap. Pibroch is a form of Scottish Bagpipe music that Cockburn describes as trance like. Janice Powers' keyboards produce drone like tones and Bruce's nifty finger work between them create the eerie sense of the bagpipes on "Pibroch: The Wind In The Valley". "Bells Of Gethsemane" broods with dark anticipation, as the title suggests. Tibetan singing bowls and bells create an atmosphere of suspense that resonates with Cockburn's suspenseful blues on the baritone guitar, folk blues meets end of the world gamelan.

Activist, songwriter, singer, guitar player, Canadian Bruce Cockburn is too interesting, too much a seeker and thinker to be constrained by one label and one box. Colin Linden who has played with Cockburn and produced ten of Cockburn's talks of his need to always try new things and how continues to be fascinated by where Bruce goes musically. If you needed proof of his ability to paint with the guitar then it's here, taking in folk, blues, jazz and trance music, creating an album that is more cohesive than that list of genres suggests and more subtly varied that the label instrumental guitar might suggest. CROWING IGNITES, a literal translation of the Cockburn family Latin motto 'Accendit Cantu' is further proof of the legendary musician's prowess and powers and the adage that players improve with age. One to add to the yards of fine albums already in the collection and If he's done an iffy album I haven't heard it, but this is evidence of another golden patch.