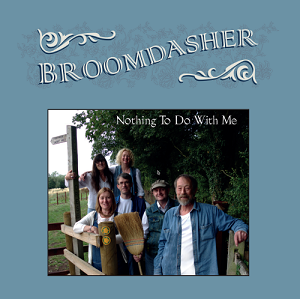 Broomdasher
Album: Nothing To Do With Me (EP)
Label: Cleansweep
Tracks: 7
Website: http://www.broomdasher.com


Nothing To Do With Me, the debut recording by mixed six-piece a cappella group Broomdasher, has just been released, bearing prominent endorsements from Messrs. Coope, Simpson and Tams no less. The individuals comprising Broomdasher arrive with an already impressive pedigree: three of them (Chris Hayes, Deena Marcus-Jedamzik and Margaret Moore) were original members of the Cecil Sharp House Choir, and they’re joined by more recent recruits Huw Davies and Josephine Swinhoe, as well as Richard Cryan. All six of them are clearly very accomplished individual singers who’ve been trained or taught by, or worked with, illustrious mentors including John Carol Case, Leon Rosselson and CB&S (whom Broomdasher supported at their farewell gig). Together their healthy spread of vocal timbres and registers encompasses a full tonal range.

Broomdasher’s calling-card EP has been cleverly compiled to reflect both their wide repertoire and the flavour and highly skilled nature of their arrangements (a majority of which are by Sally J. Davies). The disc launches itself purposefully with the song that gives the group its name, a lively traditional number that was new to me; unlike the remainder of the selections, this number comes complete with clashing rattling stick-percussion, and it’s followed by a brief snippet of an archive recording of Levi Smith by way of explanation of this calling. The subject of rabbit-catching then kindof implies a forward connection with that old primary-school staple (well, for those of us of a certain age that is!) The Keeper, and onward with Rufford Park Poachers (freshly arranged for the group by Barry Coope) and a variant of Sam Hall.

Sandwiched in between these we find a satisfyingly inventive treatment of If I Were A Blackbird, with solos taken by Chris and Jo, and John Tams’ poignant trawling-themed How High The Price/All Clouds The Sky medley (proudly trailed on the press release as having been permanently gifted to Broomdasher by its author upon hearing their rendition). Actually, I’m not completely convinced by the latter, since it feels over-arranged, not least since its gorgeous, haunting melody is often nigh submerged below the waves of its complex shifting harmony parts.

There’s no questioning the palpable sense of togetherness in Broomdasher’s well-oiled performances, and equally clearly there’s an immense amount of potential in their approach to a carefully-chosen repertoire. But even now, on this limited-exposure “taster” EP, I feel that just occasionally the arrangements can feel slightly over-busy, tipping over the line that’s drawn (consciously or sub-consciously) from folk-song into the province of art-song, where even then the cultured and consciously-crafted can seem a mite precious without the frisson and rough edge of live interaction. Then again, the latter observations may appear illogical when you bear in mind that home or parlour is usually the preferred environment for art-song. I’m still not sure where these apparent contradictions may lead, since Broomdasher have already gained a reputation for their involving, animated live performances.

Even while realising that it goes with the reviewing territory (part of the game and an occupational hazard) that one’s reactions to almost any music can, and do, vary substantially with mood, context, listening environment and even time of day, the music of Broomdasher took me by surprise by polarising my reactions over an unexpectedly wide spectrum, with the nature of contrasts in my own responses actually quite sharp (pun probably not intended, Cecil…). I could be intensely satisfied, or more than mildly frustrated, by the same track on two successive plays. In other words (and rather unusually for this reviewer who’s normally capable of coming down on one side or the other), objectivity and subjectivity have become blurred, and the personal jury’s still out.

How High The Price