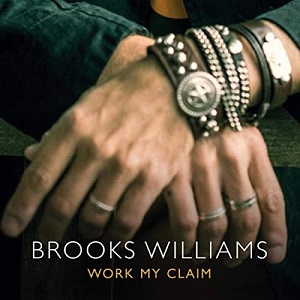 
Brooks is one of those select few "how on earth does he do it?!" artists, seemingly constantly on tour and yet every time you turn your back he's gone and recorded and released another album! That's now a total of 29 albums in a 30-year touring career. The first of these, North From Statesboro, a state-of-the-art digital recording, appeared in 1990, since which time his music has been released on a variety of other labels but most recently has settled back onto his own Red Guitar Blue Music imprint.

Work My Claim has a special significance in that it's a retrospective collection, both celebrating and consolidating Brooks' long career by presenting newly re-recorded versions of some of his favourite songs from across the three decades. Brooks has long been regarded as a guitarist's guitarist, but his other major talent (songwriting) has also inspired countless musicians; and it's a measure of the high esteem in which he is held that he's been able to call on a dazzling array of fellow-artist friends to help him record this new collection. These comprise John McCusker, Christine Collister, Jim Henry and Aaron Catlow, with Phil Richardson and Ralf Grottian also helping out (ok, no Boo Hewerdine, but at least we'll have a new State Of The Union album to look forward to next year…). An almost incidental benefit of this latest set is the way it emphasises not only Brooks' uncommon presence and excellent technique but also his strengths as a collaborator, where he's able to take on board other musicians' own strengths and styles and meld them to his own while not submerging or losing sight of those qualities. A rare talent indeed.

Oh yes, and generous intimacy is the watchword. As in every Brooks Williams live performance. For a typical Brooks Williams live set will encompass, and absorb, virtually every roots musical style imaginable, both in and out of Americana, from blues, folk, singer-songwriter, country and gospel to jazz and standards - but these inform, not slavishly dictate, his approach. And so it goes for Work My Claim, on which he moves entirely effortlessly between these styles and does a great job on every single one. He's quite simply one of the most unassuming, natural performers on the circuit, and his easy, relaxed manner conceals the greatest level of true expertise, whether using jaw-droppingly effortless fingerstyle or soulful slide to accompany his extensive repertoire of songs (many, although self-penned, are wholly idiomatic, authentic creations). He's been at the top of his game ever since I can remember, and he shows no sign of slowing down or resting back on past glories.

The re-recordings on this new album prove without a shadow of doubt that he can still cut it - and how! - and what's more, bring something fresh to these songs. It's inevitably a selective selection - as Brooks says, "I couldn't coax the other songs out of their hidey-holes … they remained on the original recordings in their time and place". Whatever, I've no space here to compare-and-contrast all the successive versions of early songs like Mercy, Illinois (dating back to 1992), Inland Sailor (1994) or Seven Sisters (1997) - the latter now especially gloriously revisited here for Work My Claim - or the even more world-weary new pared-down guitar-and-voice take on Duke Ellington's I Got It Bad. And it's important also to remember Brooks' statement that all his own original songs have two or three different melodies to the same set of lyrics - and Whatever It Takes (originally on the 2018 Lucky Star album) provides a salutary example of this, obtaining for us a completely different perspective on the lyric. Well in the top bracket too are Brooks' knowing rearrangements of well-turned covers like King Of California (here transformed into a, Irish-Celtic-folk-style ballad) and You Don't Know My Mind (now featuring some classy mandolin and harmonica work). And there's even one song here that I don't recall Brooks recording before - Georgia - but I feel sure I've heard him perform it live… Either way, suffice to say that revisiting the original CDs from all those years ago will still yield plenty of listening satisfaction. So OK, then, I just gotta leave the last word to Brooks himself: "Trends and scenes shift and alter course, but I'm still here." Glory be! Although somehow I can't think it possible to agree with his qualifying sentence: "I still think the best is yet to come", I suspect he'll be able to prove me wrong in due course!

Oh, and by the way, the album package also includes a facility to access four exclusive bonus digital tracks that didn't make the album - good on ya, Brooks!