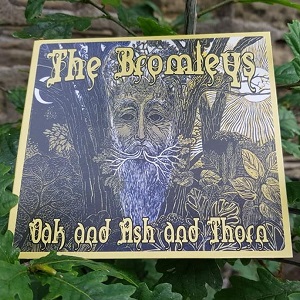 
This is the first CD release by the Halifax (West Yorkshire)- based family trio comprising father, daughter and son John, Jenny and James Bromley. And it’s a pretty accurate representation of the character and sheer potency of the trio’s live performance.

John’s singing CV is impressive by any standards, with long-time membership of Hebric (recently reunited) and the maritime crew Kimber’s Men under his belt. He’s the proud possessor of simply one of the finest bass voices in the country, whether singing lead or harmony, and his grounding role in any texture is distinctive and special. Here, his presence both defines and audibly inspires James and Jenny’s singing, to the extent that the family bond is obvious in the nature of the vocal blend, for the three individual voices are self-evidently “cut from the same cloth” (so to speak). Harmonies are both creative and persuasive. However, notwithstanding the towering nature of John’s own voice the total effect is sensitive rather than overpowering, and it also helps that the lead vocal role is shared around. Occasionally one might feel that the gorgeous thickness of the Bromleys wall of sound is double-edged, in that its very evenness of attack implies a certain perceived reluctance to hold back and this assured, upfront quality may for some listeners give a (deceptive) impression of slight relentlessness. (Some folks felt that way about the magnificent Swan Arcade… but my response is that sometimes this kind of assault on the senses can be intensely invigorating!)

The choice of material, like the vocal presentation, is good, honest, solid folk song, predominantly from the tradition but also not averse to contemporary song written in the tradition (and suitably informative and helpfully concise liner notes, like the attractive accompanying artwork, serve to enhance the whole product). Barley Straw and Marrow Bones are typically cautionary folk tales – the latter, unusually, was sourced from the version sung by Christy Moore (who, coincidentally, spent an early part of his career in Halifax and provided John with some formative folk club experiences); the lusty White Hare Of Howden comes from the singing of the Watersons. The Bromleys then deliver an especially intense account of Go from My Window, where we can marvel at the unbridled power of Jenny’s lead and the full force of the ensemble – a standout performance indeed. The disc is completed by the trusty earworm of its title song, Peter Bellamy’s magical setting of Kipling, and a consistent (if perhaps mildly unyielding) take on The Rose Of York.

So, if no-frills, good honest solid three-part a cappella singing is your thing, then this EP will be right up your street. I do hope it’s but a taster for a future full-length foray into the recording studio.