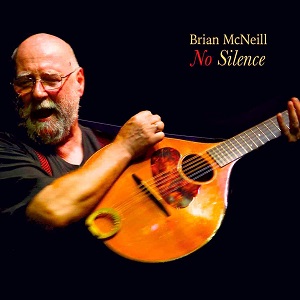 
Before I start the review in earnest, first let me put a couple of disclaimers out there. First there are a couple of my images used in the accompanying booklet and that may be because I've known Brian for a good number of years, photographed him on many occasions and shared a number of good time with him.

As with classic cars, I rarely get the opportunity to review the music of an artist that I have delved so far under the bonnet of, mostly you get to admire the paintwork and the style, but rarely get into the tunings, excellent by the way, the power plant and the construction, so this has been quite the adventure.

Similarly many of you will know that if I find an album that I find to be exceptional I will try and play it to death, to ensure that I still feel the way after repeated playings, well this album has been on the highways and byways an awful lot.

Any one that knows Brian knows that "No Silence" is what you get, as well as being a great musician and songwriter, he's an author and a great conversationalist and I guess the latter informs the former, I say conversationalist, because he's a man that also listens to what goes on around him and takes influence from it, he's also a great orator, but it's a two way flow that really inspires.

"No Silence" is an album that celebrates fifty years of Brian McNeill's music and somehow manages to distil it to ten tracks, no mean feat by itself. In addition to Brian, the album also features Tad Sargent, who Brian invited to play after hearing him on Matt Tighe's album, which Brian produced, Tad hadn't realised that he was to be the only guest on the album.

This is an album that celebrates song, composition and instrumentation as it revisits a series of Brian McNeill classics. "No Silence" is exceptional delivery, particularly as it manages to deliver to of my favourite live tracks back to back, namely "The Yew Tree" and "Sell Your Labour, Not Your Soul", a song known to many, including myself for a while, as "Join The Union". It's a song with a real passion that many haver joined Brian with on the chorus at many a festival.

It's also a song for me that sums up Brian and his music, it's a song about community, togetherness and doing the right thing, it's also about freedom of spirit and doing what's right, don't be brow beaten.

I've always said that a good folk album should be history, geography, a bit of politics, a bit of philosophy and some great tunes thrown in, well that's those boxes ticked and a few more beside.

There's a couple of sets on the album, "The Coilsfield House Set" and the sign off track, "The Modest Miss France Set", a tribute to his wife, both of which give you the chance to hear his virtuosity on a number of instruments.

"No Silence" is an exemplary introduction to both the world of folk and to Brian McNeill as well as being a tribute to fifty years of music, it simply is a stunning album and one that will be accompanying regular motorway journeys for years to come.