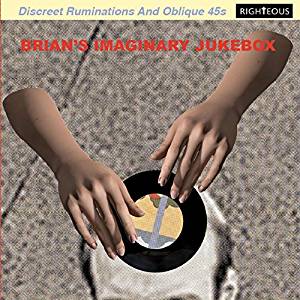 
This double CD indulges a fantasy that Brian Eno might have a home jukebox containing weird sounds drawing on anywhere from ancient pop to obscure avant-garde movie soundtracks, esoteric jazz to maverick contemporary classical and proto-ambient. So, over the course of two well-stocked discs, we encounter suitably inspirational wonky pop music placed unashamedly alongside vintage ambient musings. What's quite amazing is that, almost against all the odds, the whole collection possesses a curious internal logic all its own, and all manner of intriguing parallels get to be drawn as you're listening along to the almost random play selection.

Various aspects of Eno's early life are brought into focus here. We start with the literal jukebox beloved of American servicemen during his formative years, where Eno will have experienced nuggets of early rock'n'roll, R&B and doo-wop - some of which, like The Lion Sleeps Tonight (The Tokens) and Fever (Little Willie John), he was to cover in his own right over a decade years later. Also included are outright classics such as Sam Cooke's Bring It On Home To Me and Bob B Soxx & The Blue Jeans' finger-snappin' trot through Zip-A-Dee-Doo-Dah. This phase, which takes up the first half of Disc 1, closes with Diana Washington's sublimely smooth 'n' silky This Bitter Earth. Next up is the first of the set's three contrasting cuts by Raymond Scott, a swinging, spectrally jazzy take on Cole Porter's Night And Day, then the sequencing becomes ever more weird with a prime slice of late Glenn Miller unashamedly followed by a gloopy spaced-out Tom Dissevelt and Kid Baltan track, some very early Sun Ra in doowop mode, Leadbelly, NYC blind busker Moondog, then a sequence of classic gospel/spiritual and country sides.

If you think the selection on Disc 1 was odd, then Disc 2 is even odder, certainly less "commercially acceptable". The most "orthodox" items being almost certainly the pair of jazz classics (by Ornette Coleman and Miles Davis) which opens the disc, followed by a surprisingly accessible (almost Satie-esque) piano piece by avant-garde composer John Cage, pointing the way towards the more melodic of Eno's own ambient meanderings . After which, we enter the realms of weirdness proper with a sequence of transparently "spacey" pieces (including, we learn from the booklet note, music from the movie Forbidden Planet - although it's not specifically identified or credited as such in the tracklist). Two further examples of the art of Raymond Scott - the queasy, skewed swing-jazz-film music piece Ectoplasm and the gloopy electronica of Sleepy Time - and a couple of pithily minimal experiments by musique-concrète pioneer Daphne Oram. Also of limited value are the tracks which only provide excerpts of (lightly) longer pieces - this is especially the case with Ligeti's iconic orchestral essay Atmosphères (heard to such striking effect on the soundtrack of Kubrick's 2001) and a tape piece by Vladimir Ussachevsky, and for that matter the isolated movement from Moondog's Suite No. 1. The world-embracing orientalism of Henry Cowell's gamelan invocation Ostinato Pianissimo is taken to a logical extreme in a scene from maverick DIY composer Harry Partch's theatre piece The Bewitched, and the disc draws to a close with a fractured Marcel Duchamp piece for three voices that's both "out there" and "in there" and definitely in the "difficult listening" bracket.

The drawback of this otherwise fascinating set is that its accompanying booklet only gives release dates for the tracks, and no further information or background - a pity when so much of the music is almost wilfully obscure even to cognoscenti (I'd have welcomed more about some of the originating artists and/or the actual compositions, and in several cases even the most basic of discographical information wouldn't have gone amiss). Another niggle is the lack of breathing space in between too many of the tracks (you wouldn't get that problem with a real jukebox!).

In purely audio respects tho', this set will for a majority of listeners provide what the booklet note claims: "an education for the ears, a stimulating, thought-provoking journey, an audio trip way beyond the obvious".