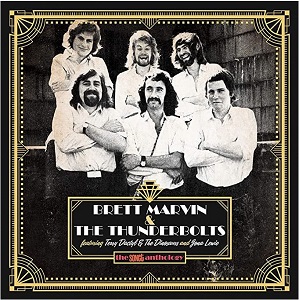 
Brett Marvin & The Thunderbolts - now there's a name to conjure with! A glorious name for a band, every bit evocative of the greasy, slightly cheesy end of rock'n'roll… but in reality this was no r'n'r revivalist outfit but a grassroots Thames Delta country-blues combo par excellence with a distinctive, authentic style and infectious good-time vibe. In its formative year (1968), the band was equally popular in its own right as when backing visiting American bluesmen. BM&TT was led by virtuoso slide guitarist Graham Hine, with the remainder of the lineup comprising Keith Trussell, Jim Pitts, John Randall and Pete Gibson. Pianist John Lewis (later to be known as Jona Lewie) joined in late 1969, making the group into a six-piece.

BM&TT was unique among the British blues-boomers in presenting an authentic American country-blues sound with a healthy dose of gleeful hokum and slightly wacky "English eccentricity", invariably incorporating (in lieu of conventional drumkit and bass) offbeat (and often homemade) "kitchen-sink" instrumentation, central to which ensemble was the celebrated Zobstick (a stomping percussion implement based loosely on the aboriginal "lagerphone"). The group's first two LPs mixed storming covers of blues standards with an increasing quotient of homegrown material, and proved a more than credible adjunct to their burgeoning live reputation. It was not joviality all the way, though, as the band proved they could cut it on the more reflective blues-based numbers too (like Pete's composition Thoughts Of You). Oh, and Jo Ann Kelly appeared as guest vocalist on one particularly racy number on the first, eponymous album (which also, incidentally, sported a cheeky "Abbey Road"-style zebra-crossing cover photo montage).

The band's third LP, Ten Legged Friend, appeared only after a two-year hiatus during which there was an excursion to the coastal (hit) parade for a Sea Side Shuffle followed by a clutch of followup singles all marketed under the catchy alter-ego of Terry Dactyl & The Dinosaurs. The inevitable musical and aspirational differences ensued, Jona left the band and Ten Legged Friend represented a re-constituted BM&TT lineup that brought in a couple of old mates. It was a more uneven set, and while though no disgrace it did showcase a more mainstream sound and approach, which continued onto a trio of singles (included here as bonus tracks) which had considerable merit but failed to make a mark. Although the band weathered the early days of punk (even sharing a bill with the Sex Pistols on one of that band's very early gigs) and continued gigging through the late-70s, they didn't release any more albums until 1993's Boogie Street (with a further revised lineup). This album, together with four bonus tracks, forms Disc 5 of this anthology. Whereas Disc 4 reprises the 1999 Mooncrest compilation, variously known as Rare Thunderbolts and Vintage Thunderbolts, which delivers sundry 1970 and 1971 cuts, one from 1978 and a somewhat later (1989) studio session which proved there was still fire left in the old dog.

The full title of this comprehensive six-disc box-set anthology appends the legend "featuring Terry Dactyl & The Dinosaurs and Jona Lewie", which rather implies you'll be getting virtually everything these guys recorded (including the handful of non-album sides), first for the Sonet label then subsequently for Jonathan King's UK imprint, together with the entire contents of the above-mentioned 1999 rarities compilation and the 1993 not-exactly-comeback set. All that's missing is the handful of cuts (both solo and group tracks) recorded for Tony McPhee's famed 1969 various-artists compendium I Asked For Water, She Gave Me Gasoline (still available on BGO, I believe), and the half-dozen sessions recorded for John Peel's Top Gear programme during a particularly hectic 1970. And of course the cluster of classic, if highly idiosyncratic tracks recorded by Jona Lewie in the three years following his signing to Stiff in 1977.

Full marks too, as expected, for the accompanying 36-page booklet, which includes a discography and a veritable gallery of archive photos and ephemera alongside its abundantly informative essay, whose only fault (that I could find!) was the nationality of "Australian" being applied to folk performer Martyn Wyndham-Read…

A commendably sturdily-presented set that allows us to appreciate better the special place that BM&TT occupies in the history of the British blues revival of the late-60s/early 70s.