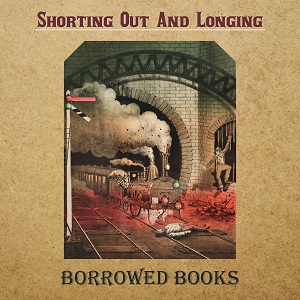 
You're unlikely to be familiar with Cateran, a Scottish grunge outfit from the late 80s who once backed Husker Du's Grant Hart and toured a then unknown Nirvana, but you may well have heard of Miracle Legion, a cult 90s college rock band once touted as the new REM and whose The Backyard has become a classic. They were fronted by Mark Mulcahy and their ringing guitar sound was crafted by Ray Neal aka Mr Ray. Fast forward to contemporary Edinburgh and he and former Cateran frontman Cam Fraser now share a library card in this new venture, this being their debut album, one that also shares their respective love of jangling American guitars and the folksy pop of the iconic Postcards label

The influences come together in fine form, opening with the cascading jangled chords of 'Mountains In Oceans', the rhythm section of Aly Barr and Chris Archer consolidating the power and immediately those heady days of Reckoning-era REM, while a hint of Neil Young hovers around the slower paced missing you 'Wooden Arm' ("It's not the distance it's the time it takes/And it's time that I have come to hate/And I wish you weren't so far away") on which pianist Colin Sands puts in an appearance. Featuring accordion by Reuben Taylor, the terrific slow strum swayalong of the defiant in the face of adversity 'This House Will Hold' touches on Cohen if he'd had a Scottish burr while Monstrous pares it back to picked acoustic guitar on an unusually slanted love song about how we all have a dark side we try to keep it locked away although "It's painful and it's lonely/Knowing there's a monstrous side of me", but "maybe you're part monster/Just the same as me/Then we could be together/Huddled in a corner on our own…a pair of happy monsters". Underpinned by a sparse bass, but given to sudden flourishes of electric guitar storms and again featuring accordion, once more Neil Young. Line, 'Harbour Wall' broods on relationships, permanence and time slipping away before what sounds like a clavichord introduces the piano-backed REM swirls of 'Gather', another number about defying the slings and arrows ("In this girl's world/Only tears have reigned… But she's getting through/And she won't mind/If that's all she has to do/To see the sun…And she can tell every one/This is what I am").

Piano also anchors the snare beat 'Northerly', Ray's plangent guitars underscoring a journey into memories of those who have gone ("I'll take the back road/And look out over cold grey seas/Where the memories of a friend still lie/And while currents surge and churn/They'll work his legacy") and the need to "sort of carry on" and "stay true/To my faith in strangers/And to my faith in you/And to my faith in fragile love/And those who are near me now".

Barr's throaty bass returns for the snarly Youngian 'Selfish Act', once more poking the sores of regret ("That selfish act I can't take back still hangs around/Pasting subtext on my words/Like the shadows on the ground"), the Neilisms also evident on the piano-led, abrasive guitars of the self-explanatory 'Kind of Mean' while, sandwiched between, the magnificent 'Altona' is a lighter, acoustic, walking beat skewed love song rootsy ballad ("Don't wait for me/I'll never be, what you need me to be…Don't wait for me, I'm not the one") that's musically more about bringing in the 'Harvest' than scowling 'On The Beach'.

Sands again on piano, they end with, first, the resigned and wearied 'Comes Around' ("all that's left when the rest has gone/Is the price I paid for being wrong") with its waves of cymbal swells mirrored as Fraser's vocals soar on the refrain, and, finally, Sands setting the melancholic, muted tone and Neal's guitar shimmering in the ether, 'Things Put Away' closes with a final end of a relationship confessional of loss, regret and carrying on ("turn myself into some kind of friend/That's how it ends, that's how it ends/But know that pain that isn't really there/Will never heal"), the last words being "But we'll fine, we'll all be fine/I know you'll remember".

Speaking emotional volumes, this page turner of an album seems sure to open a new chapter in Fraser and Neal's musical career. Pass the word on.