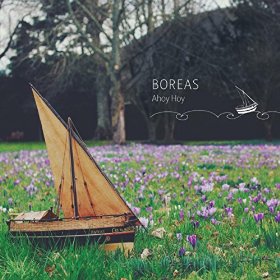 
Collaborations between exceptional musicians are always exciting to listen to, hearing what the different parties have brought to the table and how they have moulded a coherent sound from their different musical backgrounds and experiences. Exceptional musicians are definitely involved in the new collaboration, Boreas. From Norway, the accomplished Hardanger fiddle of Britt Pernille Frøholm and duo partner Irene Tillung on accordion. From Scotland, the fiddle playing and vocals of Lori Watson alongside the vocals and harp of Rachel Newton.

Together this group have created a beautiful album that is balanced and engaging. The intertwining of the Scottish and Norwegian traditions in the instrumental tracks, alongside some brilliantly chosen songs. Taking some of the songs first, North Sea Holes is a haunting arrangement of a song written by Ewan MacColl. The gently rolling harp in the accompaniment really evokes the rolling waves on the herring grounds and the vocal harmonies are spine tingling. The final track on the album is a beautiful arrangement of a Gaelic lullaby, a tune I know from childhood as Dream Angus.

The tunes, like the songs are a mixture of traditional and contemporary, as well as some original compositions from the band. The stand out tracks for me are the tunes by Lori Watson, Sillery and Ursus, Philosopher. The use of syncopation and the highly original arrangements give these tracks a very modern edge and lend the tracks a sense of drive and energy. Pairing the latter with a traditional Norwegian tune exemplifies the coming together of two musical traditions and feels like a very natural meeting of minds.

Overall, this is an excellent new musical partnership and if you have a chance to catch them live then it will be well worth the trip.