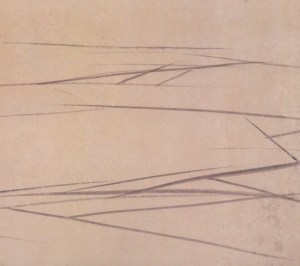 
Well this is something different from Hewerdine, a distinct contrast to its full band predecessor, Swimming In Mercury, an album stripped to voice, pedal steel, woodwinds, brass and assorted keyboards (including a 100-year-old Dulcitone with felt hammers) with not an acoustic or electric guitar to be found and featuring just him, Danish multi instrumentalist Gustaf Ljunggren and Chris Pepper on some bare percussion. It's an approach that extends to the album cover, Cracked Ice by 18th century minimalist Maruyama Okyo.

The songs interspersed with brief instrumental oddities, it's an album about fragility and quietness that, opening with the shimmering cadences of 'Last Rays of Sun' with its toy piano in search of true beauty, often has the feel of something that might have come from the 30s or some pastoral soundtrack to a 40s romance. If you want touchstones they might be found in Peter Skellern, the more bucolic moments of The Lilac Time or, indeed, Noel Coward.

That's not too fanciful, 'Old Songs' is a reverie of days when the family would gather in the parlour for an evening singsong, a celebration of those melodies that live "in our memories from so long ago". Reflection is there too on 'Imaginary Friends', a slightly Gauloise sounding reminiscence of a childhood cycling along the old canal to spend your pocket money in town, a lonesome but never lonely life, finding escape in imagination and 45 records.

Another song about the passing of time and the bittersweet tranquility of solitude, 'Silhouette' plays like a musical box waltz with Ljunggren on clarinet as he sings "When shadows are your own company, then you're a silhouette."

The eco-themed 'Before' travels even further back to a world unmarked by human footprints as he invites "Come with me and understand, this was never our own land", a reminder that the planet existed before we did and will do so afterwards.

Etched out on keys, the tinkling, waltzing 'Reno', as the title suggests, has a vague country feel before he presents his own version of 'Starlight' the song of enjoying love while it's here that's also the title track of Eddi Reader's current EP.

That sense of finding escape from the weight of the world is there on the dreamy Peter Pan referencing 'Neverland', heading into the final stretch with the tender woodwind melancholia of 'Wild Honey', another song to mention the innocence of childhood, where apples smell of love, closing with the strings enrobed 'I Wish I Had Wings', an airy, soaring song of optimism that floats over the rooftops attached to a balloon like the soundtrack a euphoric momentgin a Maurice Chevalier musical as he sings "I know these words aren't much, but I don't care/I can hear an orchestra it's in the air." Listen carefully and you'll be swept up in the caress of its swell.