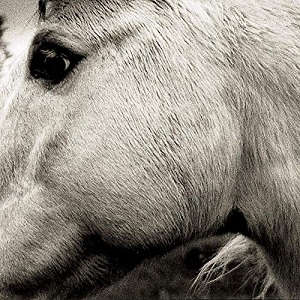 
This is an album of basically traditional material, mostly originating in the Britiish Isles, freshly arranged by a kind of folk-supergroup that, we learn, formed almost casually. The band calls itself Bonny Light Horseman, after the song of that name – “not because it sounds kind of cool, but because it’s somewhat emblematic of what we’re trying to do here”, to quote band member Eric D. Johnson, “(to) sing you ancient love songs of timeless humanity and heartbreak. Songs that are gonna make you feel something no matter what century you’re in.” This synergic connection to “ancient music that feels, emotionally, right now” was there the moment the three core band members got together, we’re told.

The band basically consists of singer, playwright and guitarist Anaïs Mitchell, singer/multi-instrumentalists Eric D. Johnson (of Fruit Bats) and Josh Kaufman (Hiss Golden Messenger, The National). They also use a rhythm section Michael Lewis (bass, tenor sax) and J.T. Bates (percussion) – but on this eponymous album project they’re also joined by a whole host of collaborators who step in and out of the spotlight mercurially and momentarily, including guitarist Anton Dessner, banjoist Kate Stables and violist Barbara Jean Meyers and an array of guest vocalists including Lisa Hannigan, Justin Vernon, Bella Blasko and Emily & Jessica Staveley-Taylor (The Staves).

As might be expected then, the core BLH team imparts a strong sense of unity and togetherness to this set of songs, yet at the same time the feel of the whole proceedings seems to stem less from the identities and personalities within the fluctuating cast-list than might be expected. But there’s also a subtler unity that stems from the team’s musical responses to the texts. The general feel is actually rather understated, appealingly reflective as a norm, and so we find that the majority of songs are taken at a uniformly leisurely mid-tempo with warm guitar lines, brushed drums and gentle layerings, in settings which however seem to tone down rather than purely complement the vocal expressiveness and thus point less to any drama in the songs themselves that was the case on Anaïs’ album of Child ballads that she recorded with Jefferson Hamer a few years back. But then again, the songs chosen for Bonny Light Horseman’s album are by nature less overtly dramatic, for there’s less in the way of onward momentum or “action” since they depict states of mind – for instance the forlorn plight of the Bonny Light Horseman’s lover lost in the war.

Perhaps the most successful treatments are given for the ballad-like Magpie’s Nest and Blackwaterside (the latter more effective for sharing the vocal parts), and the more upbeat Jane Jane which cleverly interpolates the call-and-response of the spiritual Children Go Where I Send Thee. Elsewhere, Lowlands (a mournful slow-shanty) survives its transition well, whereas Bright Morning Star(-s) rather loses its spiritually rousing demeanour in this cautious re-enactment. The album also contains one strictly non-traditional number, Deep In Love, which sits a trifle uneasily in this company, despite its stated kinship with The Water Is Wide. In which context, Anaïs’ statement can be seen to illuminate matters somewhat, for she says: “the songs feel like ours, but they’re not ours. We worked on them and they feel like an authentic expression of us, but we’re also re-enacting ritual”. In other words, the spell of that ritual feels almost to be a priority; but however undoubtedly strong this is, it doesn’t completely satisfy. And the broad similarity of mood also works against the interpretations, especially where this may be considered to be at odds with the songs.

So all in all, then, the jury’s out on this project. However spellbinding these re-enactments of individual songs might initially seem, I feel they pall when listened to in one sitting. But I still consider the experiment worth making and recording, and maybe a second volume would yield more insights.