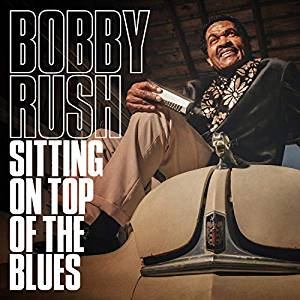 
Now well into his 80's, longevity is certainly the name of the game with legendary blues man Bobby Rush. 'Sitting On Top Of The Blues' is his 26th studio album and 75th career release following hot on the heels of the 2017 Grammy Award winning 'Porcupine Meat'.

As would be expected with a career as long as Rush's, it has waxed and waned over the years but the last decade has been his most consistently recognised and acclaimed. As well as the previously mentioned Grammy, to date Rush has earned 12 Blues Music Awards and 48 nominations, including for the prestigious B.B.King Entertainer of the Year Award and Album of the Year.

The 11 songs on 'Sitting On Top Of The Blues' are all Bobby Rush originals and supplementing his trademark harmonica and vocals are the usual band of stellar musicians. Production duties are also shared around this time with Patrick Hayes, Vasti Jackson, Bobby Rush and Scott Billington all being credited.

The R&B, soul infused opening track 'Hey Hey Bobby Rush' perfectly sets the tone for the album, strutting in on almost funky rhythm guitar and relentlessly bumping bass before the band proper kicks in with all horns and guns blazing. On top of all this sits Rush's gloriously lived in but right on pitch archetypal blues growl telling us all, as we hadn't gathered by now, he's a blues man!

Barely pausing for breath the harmonica led 'Good Stuff' rattles through before 'Get Out Of Here (Dog Named Bo)' slows the pace, but not the intensity, ever so slightly whilst still locked into the mightiest of grooves.

'You Got The Goods On You' is back to the funky bump of the opening track and 'Sweet Lizzy' is all harmonica fills, organ swells and a slightly more rural blues sound.

The relentless pace continues with the instrumental harmonica showcase 'Bobby Rush Shuffle' where Rush's playing really shines, until at last at track seven things slow a little with the acoustic guitar and vocal blues of 'Recipe For Love' and the listener can take a well earned breather.

This little oasis of relative tranquillity continues with the languid guitar fills and vocal of 'Pooky Poo' and the steamy, almost Barry White stylings of 'Slow Motion' with Rush's half sung half spoken lyrics.

This three track hiatus is rudely interrupted by the sharply syncopated 'Shake Til' You Get Enough' and before we know it the final and improbably titled final track 'Bowlegged Woman' barges in on yet more sharp drums, bass and harmonica.

Well, no sign of Bobby Rush slowing down anytime soon and 2019's 'Sitting On Top Of The Blues' is another great album that manages to meld blues, R&B, soul, funk into his singular sound. At times some of the lyrics feel a bit old, dated and from another era but the songs themselves are always rescued by the impossibly tight ensemble playing, Rush's front and centre harmonica and that beautifully strong voice astride the mix.

All in all, business as usual and another great album from Bobby Rush.