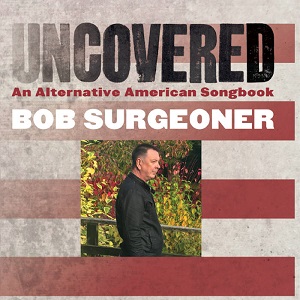 
North-east-based Bob's CV includes most famously a major stint with Jez Lowe and his Bad Pennies back in the early-to-mid-'90s (he appeared on those great albums Bede Weeps and Tenterhooks), but he's a fine musician and singer in his own right, as this, his latest offering, demonstrates. As far as I recall though, Bob's last appearance on record had been way back in 1999, on the album Oblique House in duo partnership with Bev Sanders (another erstwhile Bad Penny). Then I recalled his fun teaming with Bruce Rollo, calling themselves Loose Like A Goose, who're still gigging their infectious brand of crowd-pleasing good-time music (LLAG also released their own album back in 2013).

Anyway, Bob's newest solo record is Uncovered, and the clue's in the title - and the subtitle ("An Alternative American Songbook") - for it's a collection of covers, an unpretentiously presented and unashamedly personal selection. In a way, there's a similarity with the LLAG set, in that the menu includes in its ranks a standard or two, some hokum and old-style country and swing. And there's no denying that Bob holds considerable affection for the songs he's chosen, for all that it's a slightly oddball selection at times and the sense of personal connection doesn't always come across. Except, that is, most directly in the actual mechanics of his performance - characterised by expert, able-bodied (and able-voiced) multitracking, whereby Bob plays guitars, double bass, piano, harmonium, accordion and percussion and supplies backing vocals too. The recording possesses suitably "neat acoustic" properties (if I may reuse that tag!).

Bob certainly makes a good fist of Smith & Gillespie's 1949 standard That Lucky Old Sun and Hoagy Carmichael's Hong Kong Blues, for instance, and his choice of finale, The Beach Boys' Brian Wilson's little-known solo track Love And Mercy, prefaced by an instrumental version of his Day In The Life Of A Tree, is an inspired and unusual one. Bob's arguably most persuasive on the tracks where he takes a bit of a chance with arrangement or idiom - like his combination of a gently-paced Yellow Rose Of Texas with the O'Carolan tune Blind Mary. He also scores on a laid-back bluesy account of The Temptations' old hit Papa Was A Rolling Stone, the country-style Along The Road and Solid Gone and a slightly bluegrassy charge through Chuck Berry's Promised Land, along with Hank Williams' I'm So Lonesome I Could Cry and Tom Waits' The House Where Nobody Lives. If I can be totally honest, though, I'm not sure that Bob always gets the full measure of every song he tackles - some feel just a touch under-nourished, even subdued - for all that the project was evidently something of a labour of love.