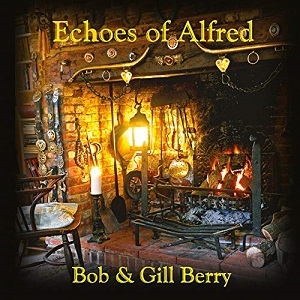 
Bob and Gill would deserve a place in the folk hall of fame just for their pivotal role (in their adopted home county of Wiltshire) as long-term organisers of Chippenham Folk Festival. However, that very achievement may over the years have mildly overshadowed their strong appeal as engaging and entertaining performers in their own right, steeped in a family singing and song-researching tradition stretching back through Bob’s parents Len and Barbara. It may well come as a surprise, then, that this new release is only Bob and Gill’s second record for WildGoose (the first being BitterSweet, a full dozen years ago). The principal impetus for this more recent foray into the recording studio was the latest spate of research currently being undertaken by Bob and Gill and others (continuing and carrying forward Len and Barbara’s own researches) into the song collecting activities of Swindon’s “Hammerman Poet” Alfred Williams in the neighbouring county of Oxfordshire in the early decades of the 20th century. Thus, a good proportion of this album’s songs are taken from Williams’ collection.

It must be noted that Williams tended for the most part only to collect lyrics and not tunes, so the task facing any singer intending to perform these songs is necessarily rendered more complicated. But we need not fear, for Bob and Gill have risen splendidly to the challenge, Bob either adapting existing tunes to the words or devising tunes of his own in the traditional idiom. In some cases, Bob may have added a verse or so to the original collected text, say in order to complete the story, and it’s a tribute to Bob’s artistry, and complete suitability for the task in hand, that the listener will almost certainly be unable to distinguish original from added text (even if passingly familiar with those originals). Songs you think you know but may not quite – yes, there’s always a fresh vibe of discovery about Bob and Gill’s stylish performances, especially where a given song may already be pretty familiar in a “standard” or accepted version. Examples include Sprig Of Thyme (here sung with a more despairing slant than usual), Through The Groves (a more introspective version of the Holmfirth Anthem), Salisbury Plain (a minor-key take on Rout Of The Blues made famous by the Dransfields), Chickens! (a version of Chickens In The Garden from the Watersons’ canon), and the jaunty Epsom Races variant Broken Down Gentleman.

The disc contains no fewer than three songs collected by Williams from David Sawyer of Ogbourne St. Andrew, including the fun My Jolly Waggoner Drive On (sung from the horse’s perspective!), while the delightful Out With My Dog In The Morning (inspired by the singing of Keith Kendrick) was collected by Williams from Mrs King of Castle Eaton (as was Chickens, it turns out). Lusty a cappella is the order of the day for the 19th century protest song Deny No Man His Rights and the affectionate My Good Old Wife’s A Good Old Cratur, one of two songs here that was set to music by Bob’s mother Barbara. Good contrasts are provided by Gill’s fine account of the murder narrative of Sarah Gale and the music-hall song I Was Much Better Off In The Army dispatched with brio and relish by Bob. And just before the album’s mid-point we find its only song of non-traditional origin – the lovely Days Of Summer, from the pen of Sussex singer Miggy Campbell, which evokes a comparable response to any area of natural beauty (here the liner notes reference Dew Ponds on Salisbury Plain).

Both Bob and Gill sing faultlessly and with due accomplishment and feeling, but also with a companionable lightness of touch and an uplift of the spirit, their individual voices distinctive and blending well from years of singing together. This collection of songs is rendered all the more irresistible by the inspirationally lively and well-judged (and commendably un-showy) instrumental accompaniment involving (aside from Bob’s own guitar, mandolin and bouzouki) just three other musicians – Lewis Wood of the trio Granny’s Attic (on fiddle, mandolin and piano), Gill Redmond (cello) and Richard Rees (melodeon) – and a small number of fellow-singers mostly from Bob and Gill’s former band Tinkers Bag.

This is an important album in the context of the presentation of the musical heritage of the upper Thames, but it is also a very entertaining listen on all fronts, and will definitely give much pleasure.

I'll Weave Him A Garland