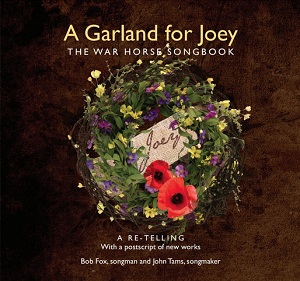 
Michael Morpurgo’s “story of a horse, a boy and a man”, War Horse, first came to the attention of the National Theatre’s playmaking team around a decade ago; it followed naturally that John Tams would be cast in the prospective role of Songmaker; and so it was. The play’s main characters grew up in Devonshire, a landscape rich in tradition, and so, in the words of John Tams, “it felt right to reflect their lives through songs of their own rural community before lifting those lyrics and melodies and throwing them into the mud and wire and blood of Flanders Field”. John in turn invited Bob Fox to become Songman and help him to realise this concept.

Hefty acclaim greeted the resulting National Theatre production, and now, finally, to mark its tenth anniversary tour, we get a lasting silver-disc record of “the songs from the show”, for the first time given in complete performances away from their fragmented (albeit highly effective) use in the stage production. And as you’d expect, this gambit makes for an altogether more satisfying home listening experience. The War Horse Songbook gathers together all eight of the songs concerned – although several are John Tams originals, they were not originally created specifically for the production, but John had a “making or mending” hand even in those of traditional origin (Scarlet And The Blue and The Brisk Young Ploughboy). Such is the deep folkloric character and quality of the remainder, though, that most of them could easily be considered to be from the tradition. I’d single out Snowfalls (The Year Turns Round Again) and Lullee Lullay in particular (the former you’ll recall from performances by The Albion Band, I’m sure). And the three songs (Devonshire Carol, Stand To and Only Remembered) which are poignantly accompanied here by the Carlton Main Colliery Band. Bob Fox sings them all – and the rest too – with intuitive brilliance that fully justifies his role as Songman, for he truly inhabits the songs as nobody else could. He’s simply one of this country’s finest singers, no argument. Aside from the last-mentioned three titles, Bob accompanies himself on guitar – and again, his playing (though surprisingly, and unjustly, underrated in some quarters) is an object lesson in skilful, stylishly moulded expression that never gets in the way of the text but instead humbly pays service. In this regard, the early Tams classic Rolling Home makes an interesting contrast with the treatment we usually encounter – and is equally valid.

Following on from the eight War Horse songs, the disc concludes with a Postscript that gives us a sequence of (mostly new) John Tams compositions which form companion pieces to the main storytelling thrust. The final song is a new rendition of his choking Home Service ballad Scarecrow with a fresh arrangement incorporating a solo cornet part (Sam Fisher). It’s impossible to escape the eternal relevance, so many years on, of this song, for it underscores War Horse’s central message of remembrance – and above all peace. Lovingly presented by Fledg’ling too.

Snowfalls (The Year Turns Round Again)