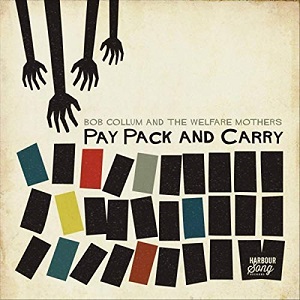 
Born in Tulsa, but a long-time resident of Essex, his nasally voice at times reminiscent of Gerry Colvin, this time round Collum and the core rhythm section of Matthew Hall and Paul Quarry are joined by new recruit Mags Layton on violin while album guests include REM veteran Peter Holsapple on guitar and organ, The Rumour's guitar legend Martin Belmont and frequent pedal steel collaborator Allan Kelly.

Collum's stock in trade is catchy Anglicana country pop, the album opening with post break-up number 'Across A Crowded Room' and flowing fluidly into Catherine Row which, co-written with mandolinist Dave Bailey, has a sort of Celtic tinge to it while, bobbing along on fiddle and pedal steel, 'Pay Pack and Carry' itself is jaunty good time old school country.

Along with the two other originals, the rockier 'Hey Blue' and the twangsome spry Tin Can Telephone with its Johnny Cash chug, there's two covers, both featuring Holsapple's harmonies, a, to be honest, rather colourless version of Mike Nesmith's 'Different Drum' and, far better, their swayalong arrangement of Mike Heron's Appalachian waltztime 'Log Cabin Home In The Sky' from the Incredible String Band's 1968 album Wee Tam.

It might not attract a swarm of new admirers, but those who've followed him since his first UK release in 2009 or even from his five albums releases back in America won't be in anyway disappointed.